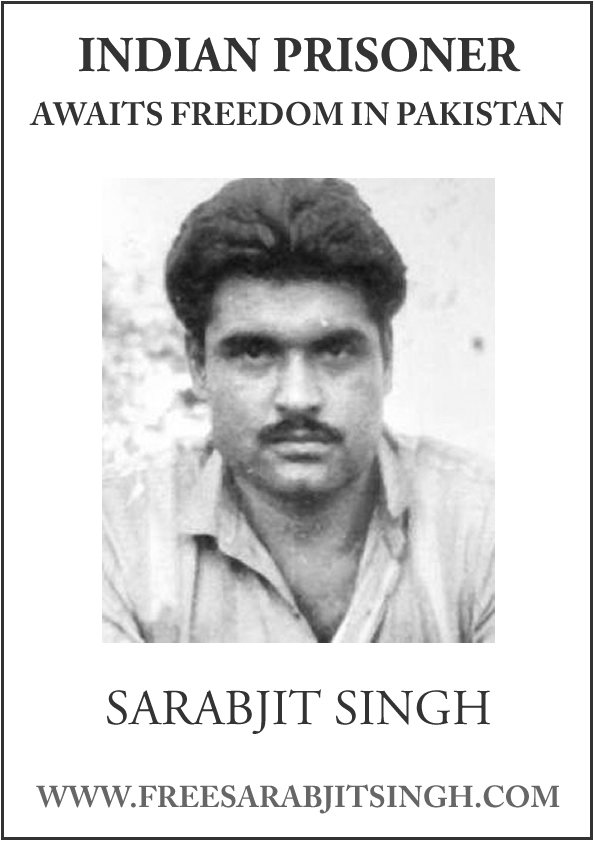 Lahore/New Delhi, April 26 (IANS) Indian death row prisoner Sarabjit Singh was admitted to the ICU of Lahore’s Jinnah Hospital after a murderous attack on him by fellow prisoners in the city’s Kot Lakhpat jail Friday afternoon, his family in Indian Punjab said. Indian High Commission officials in Islamabad are to visit Singh in hospital where doctors are battling to save his life, said an official.

Sarabjit Singh reportedly suffered critical head injuries in the assault. His condition was described as stable by hospital doctors. He was attacked by 4-5 prisoners with bricks and plates.

The reason behind the assault was not immediately known.

The assault on Sarabjit comes a few months after the death of Indian prisoner Chamel Singh in the same Kot Lakhpat jail after he was allegedly assaulted by jail staff.

A sobbing Dalbir Kaur said: “Some prisoners had been threatening him. It was a conspiracy and he was deliberately attacked. Why was he not protected … I want to go to Pakistan immediately.”

“If our government had taken steps, this attack would not have taken place. I had met the home minister (Sushilkumar Shinde), (minister of state for external affairs) Preneet Kaur and all others with letters mentioning that Sarabjit Singh could be attacked. No one did anything and the attack has taken place,” said Dalbir, who lives in Bhikhiwind town of Tarn Taran, 50 km from Amritsar.

Pakistan human rights activist Ansar Burney, who has been pleading for clemency to Sarabjit Singh, too said the attack looked “suspicious”.

“The attack looks suspicious. Someone could be behind this. No bricks or other material can reach the place where Sarabjit has been kept. This must be thoroughly investigated,” Burney told news channels from Karachi.

The Indian high commission in Islamabad has urged the Pakistan government to provide all necessary medical and other help to him, said official sources in New Delhi.

According to the sources, the Indian High Commission contacted the Pakistani ministry of foreign affairs for ascertaining facts.

Two officials were being sent to Lahore for consular access, said sources in the external affairs ministry.

Sarabjit Singh has been on a death row in Pakistan since 1990 after being convicted by Pakistani courts for bomb blasts in Lahore and Multan cities which left 14 people dead.

Sarabjit’s family claims that he had inadvertently crossed into Pakistan in August 1990 in an inebriated state and was arrested there.

But police in Pakistan claimed Sarabjit Singh, who is known as Manjit Singh in the country, was involved in acts of terrorism.

A resident of Bhikhiwind township, along the India-Pakistan border, he had been languishing in Pakistani jails since then.

Dalbir Kaur had said in Kolkata last month that the UPA government had not been very sensitive about resolving the mistaken identity issue involving her brother.

Chamel Singh, said to be in his 60s, was serving a five-year term for espionage and died at Jinnah Hospital Jan 15. During an autopsy done on March 13 – nearly two months after his death – marks of injury had reportedly been found on the body.

His family alleged he was killed in the prison but no probe was carried out by Pakistani authorities. His body was returned last month.

“Pakistan responds to India’s Mission abt Sarabjit… Medical condition is serious but doctors r working round the clock to save him,” he posted.

Preneet Kaur, speaking to news channels, said: “We have seen the reports, we condemn it and we have sought consular access Once we know what is the position, we will decide on what steps to be taken.”