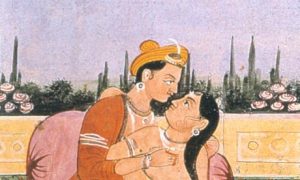 London: This is one app which may be best avoided fiddling with while driving to workplace or when kids are around. But many users may find it too irresistible.

Kama Sutra, the 2,000-year-old Indian sex manual, has been sexed-up for the modern-day audience with a new app which enables people to study the poses in 3D.

The free app – Kama Xcitra – transforms the historic manual’s illustrations into 3D images, when viewed through a smartphone or tablet. Each image can be seen from all angles, which means users are offered a complete view of the guide’s sexual diagrams, The Independent reported.

It takes users through sexual positions such as the Catherine Wheel or the Prone Tiger, allowing amorous couples to view the position from a variety of angles.

The Kama Xcitra promises to help couples master positions set out in the original book and ensure they are brought “closer to the action than ever before”.

“Each image appears to pop out of the page as a 3D hologram right in front of the reader’s phone. The viewer then moves their mobile device around to appreciate the position from all angles.

“As a result, each position becomes clearer, finally solving the problem of where to put that awkward elbow.”

Also, the app works in conjunction with 69 poses. It allows users to customise the appearance of models, changing hair and skin colour as well as adding music as a soundtrack.