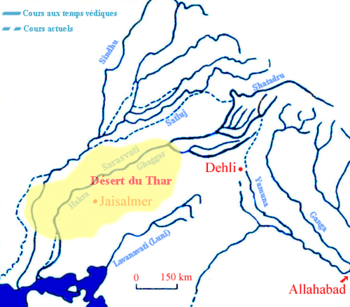 Chandigarh: Mentioned in Hindu mythology as a sacred river but since dried up, Saraswati will see water flowing down it again from this year.

Haryana Chief Minister Bhupinder Singh Hooda Monday announced that the Saraswati river, passing through Pehowa town near Kurukshetra, would be rejuvenated this year.

“Fresh water would start flowing in it from this year so that the pilgrims could take a dip in this sacred river also, as they bathe in sacred tanks in Kurukshetra,” Hooda told a gathering in Pehowa town, 110 km from here, Monday.

The Haryana government had in 2009 reiterated its commitment for research on the Saraswati river and ensure complete flow of the course of the sacred river.

The river had dried up centuries ago and had gone missing from all maps. The mention of the Saraswati river comes in the ‘Vedas’.

Mythology has it that the ‘Vedas’ were written on the banks of the sacred river, which, according to Hindu religious beliefs, is believed to flowing underground now.

The Haryana government has assured to provide water to the Saraswati river from the Dadupur-Nalvi canal to infuse new life in this river.

The minister appreciated the efforts of the Oil and Natural Gas Commission (ONGC) in tracing the course of the sacred river.