Manali: Majority of the Kullu- Manali valley population are farmers who live in villages and only few of the benefits of economic activities of recent decades have reached the village. Profits have instead mostly found their way into the pockets of hotels owners and businessmen from cities outside the valley.

The Kullu valley has undergone sea changes during the last few decade that experienced a period of rapid and unregulated economic growth, fuelled in most part by the mass tourism industry and construction of hydropower projects in the valley. 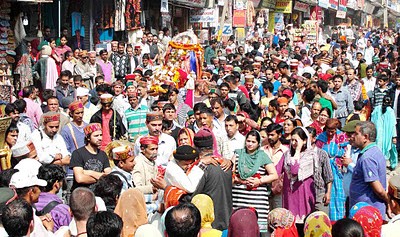 These fast changes have placed enormous pressure on the land and caused direct pressure on village economy of the valley. Due to big hydro projects coming up in valley the demand of daily needs have gone up drastically up thus causing inflation in local markets.

The villagers, however, have had to live with the cost of such development, which includes deforestation, increasing pollution levels, a growing waste problem and rising living costs.

Combined with the inevitable fate of having to divide their land between the sibling of each succeeding generation, farmers are now finding it increasingly difficult to meet their daily needs from their fields and there is a growing need for cash income.

The farming land in valley has reduced substantially over the decades and further had also been divided in growing families of villagers, reducing cash crop income of villagers, as old traditional methods are still in practiced in the countryside valley.

The state government has done very little to educate the villagers about adopting latest scientific means of cultivation and growing of cash crops like exotic vegetables which has much better yield than traditional crops and also fetch higher value in the markets.

Fruit growers and orchard owners of the valley are not even made aware of latest packing material available in market which saves upon space and packing cost. The state government has not promoted a policy of direct marketing to save on middle men costs.

Adding to the fate of the valley, most of the hotels are either leased out to businessmen from outside the valley or have been bought by them from local natives by just offering small amount of money.

The impact on the local economy is that local people are just seen doing odd jobs in hotels and businessmen from outside the valley maintain a stranglehold on the hotel industry here. Much of the taxi operators and grocery shops are also run by non local people.

If the social problems, coupled with corruption are not dealt immediately, the situation is likely to deteriorate, causing further economical depletion in villages of valley.