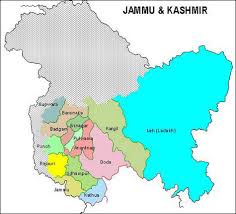 Jammu: Jammu-centric opposition parties staged a walkout from the assembly here today over the delimitation of Jammu and Kashmir assembly constituencies.

The Jammu and Kashmir National Panthers Party (JKNPP), the Bharatiya Janata Party (BJP) and Jammu State Morcha (JSM) had demanded a discussion on the delimitation of the state assembly constituencies.

However, assembly Speaker Mubarak Gul ruled that the issue could be taken up during the zero hour.

This led to a walkout by members of the three parties.

JKNPP president Balwant Singh Mankotia said outside the assembly: “Discrimination against Jammu region is increasing by the day and it (Jammu region) is not getting its due in employment, development and funds.”

JSM leader Ashwini Sharma said: “Jammu region has an area of about 27,000 sq km while the Kashmir Valley has about 16,000 sq km. Kashmir has 46 seats and Jammu has just 37 seats in the assembly. The remaining four are in Ladakh, which has an area of 89,000 sq km.”

In November 2010, the Supreme Court had upheld the freeze imposed by the Jammu and Kashmir government on delimitation of assembly constituencies in the state till 2026.

Constitutionally, delimitation cannot be taken up in the state without an amendment in the Jammu and Kashmir constitution and the Peoples Representation Act.

In April 2002, the then National Conference (NC) government had brought a bill to halt the delimitation process till 2026. The last delimitation in the state was in 1995.

Jammu-centric parties believe that it was a strategy to “keep Jammu subservient to the Kashmir Valley”.

“If delimitation of assembly constituencies is held, then Jammu region is sure to get its justified share in governance,” Singh said.