India finally routed Australia 4-0 and revenged the whitewash at their hands back in 2012. It was a dream run for the Indian youth brigade where runs and wickets came in plenty for them. However, does the latest victory end all the troubles for us and ensure bright chances against the mighty Proteas? 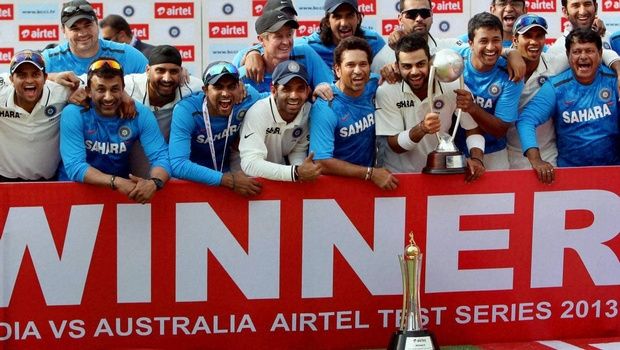 In the recently concluded series, Ravinchadran Ashwin was the highest wicket taker and Cheteshwar Pujara scored his maiden double ton in test match cricket. Murli Vijay, Virat Kohli and Ravindra Jadeja fared no bad either and earned huge praise for their exploits on the pitch.

It seems India has filled all the voids left over after the departure of Rahul Dravid, VVS Laxman and Saurav Ganguly in the batting department. Considering the fading days of Harbhajan Singh, Ashwin has replaced him perfectly well too. In addition, Pragyan Ojha (who completed his 100 test wickets recently) is a perfect partner to him in the spin department.

All of a sudden, everyone including cricket experts seems to overlook the drubbing India received at the hands of England and Australia in 2012.

Amusingly, those who have tracked the fourth test match in Delhi ball by ball must have noticed that when Aussie pacers begin to experiment with the short pitched deliveries against the Indian batsmen (in the 4th test match), the solid defenses (up till now) of our young turks seemed to wilt a bit, all of a sudden.

It was clearly observable how the young guns faced difficulty fending off the balls directed at their rib cage area even on a dead track like that of Feroz Shah Kotla.

This sends appalling signals before the approaching South African tour where it is imprudent to expect any respite from the likes of Steyn and Morkel.

While Tendulkar struggled against the rookies like Nathan Lyon in the second half of the series, not much is expected of him. Although, if he comes strong over there, India would be unquestionably faring well.

Nothing is clear about the future of Virender Sehwag too who enjoys superb record against the Proteas in the past. His chances to re-enter the India test team after getting dropped for the last two tests against Aussies are not very lucid either. However, he clearly deserves a chance in the forthcoming test match series as the pitches in the African country would undeniably suit his style of play.

If we travel back down the memory lane we would recollect that Ashwin struggled completely on fast and bouncy pitches of Australia last year as did the other Indian bowlers. Even Ishant seems to lack both the swing and speed that he was famous for at one time in his career. Bhubaneshwar may prove tad handy with his swing, but speed is required undoubtedly on the fast wickets of South Africa against the batsmen of class of Smith, Amla and Kallis.

Picture about Zaheer Khan is fairly blurred. Even though he would surely be accessible for IPL (for obvious reasons), his availability for the test series is unconvinced.

In conclusion, our batsmen should get ready to face the chin music on the unpredictable tracks of the African country and bowlers should practice their flippers and bouncers perfectly before they get caught oblivious as in the numerous test series of the past.