Shimla: Getting tough with protesting unions of HP Road Transport Corp (HRTC), minister GS Bali has warned that strong action against the protesting leaders and disciplinary action would be initiated against those making public statements.

Talking to reporters, the minister said that the finances of the public transport corporation was in a mess as it has accumulated losses to the tune of Rs 367 crore on its books. 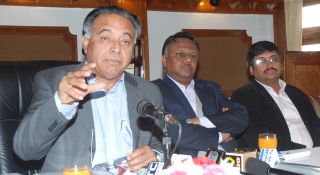 “Even to pay salaries, HRTC has been taking loans for meeting the committed liability, he said.

Expressing willingness to settle issues through dialogue, Bali said that all should work towards restoring the financial health of Himachal roadways but gate meetings that were in violation of service rules would not be permitted.

The transport union has been protesting over working hour conditions, pay revision dues and other issues and have even threatened to go on strike.

Laying the blame of the poor financial position of the state transport corporation on the previous government, he said that efforts to improve per liter mileage of buses had begun to show some results.

The minister conceded that bad road conditions in some parts of the state was resulting into low mileage for the routes operated thereupon. “We will ask the government to compensate for operating on such routes, he said.

To improve service, the minister said that 300 to 500 new buses would be bought in the year ahead, which would help to replace the old ones.

We are also going in for wet leasing of buses, whereby the revenues would be collected by HRTC but the bus, driver and maintenance of the bus would not be our responsibility.

The state transporter has a fleet of 2072 buses and serves in very difficult areas, even on some routes that are not profitable as road transport is the only means of travelling in the hilly terrain.