Pune: Aaron Finch made his IPL-6 debut in style and powered Pune Warriors to a much needed victory against Rajasthan Royals at the Subrata Roy Sahara Stadium here Thursday.

Finch (64 off 53 balls), through his sheer display of brute force, ensured Pune ease past Rajasthan’s 145 for five in 18.4 overs. Rajasthan skipper Rahul Dravid struck a spectacular 54 but could not prevent his team’s first loss in three matches.

On the other hand, it was a morale boosting win for Pune, who went down in their first two matches of the competition and was staring at another sorry season. 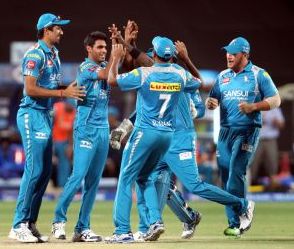 The chase was expected to be a tough one for the hosts as the pitch played slow, making stroke play difficult. But openers Finch and Robin Uthappa (32) made the job easier by smashing 51 runs in the first four overs.

The dangerous pair first took on the young off-spinner Harmeet Singh, collecting 17 from his second over. The fourth over of the innings saw S. Sreesanth leaking 22 runs with Uthappa doing the maximum damage.

Uthappa fell in the next over but Finch carried on to guide the team home. The Australian hit six fours and three maximums in his cracking innings.

Yuvraj Singh, returning to action after missing the last game, played well for his 23-ball 28.

Earlier, Rajasthan could not capitalise on the start provided by Dravid and Ajinkya Rahane (30).

The classy duo forged an 81-run partnership after Rahane’s opening partner Kusal Perera was trapped in front of the stumps by Bhuvneshwar Kumar on the first ball of the match.

Dravid’s sublime knock was full of conventional strokes, laced with eight boundaries. It was his second fifty in three matches and the way the 40-year-old is playing in the tournament, it does not seem that age is catching up with him.

It took a special one-handed catch from Ross Taylor to dismiss the Indian batting great.

The flow of runs slowed down after Dravid’s dismissal before Brad Hodge (22) produced a useful knock towards the end.