Dharamsala: His Holiness the Dalai Lama and Sikyong (Prime Minister) of Tibetan government in exile Dr Lobsang Sangay will attend the Golden Jubilee of Central Tibetan School for Tibetans Dalhousie. 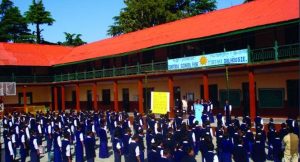 Other noted guest who will be present at CST Dalhousie for the occasion will include Tibetan Nobel Laureate and former Prime Minister Samdhong Rinpoche.

According to the CST Dalhousie’s website, the program for the three-day function will include address from Samdhong Rinpoche, various cultural activities and basketball and football matches.

A school Golden Jubilee Magazine “Souvenir” will be released by His Holiness the Dalai Lama on the occasion.

The CST Dalhousie website states that the Golden Jubilee function is primarily dedicated to the people and the Government of India for their kindness and generosity they have shown to all Tibetans during their darkest period in history.

Central Tibetan School for Tibetans Dalhousie was established in May 1963 and has ever since been a source of education for thousands of students. Currently the school has classes from kindergarten up to class 12, with over two hundred student of Tibetan and Indian decent studying together.