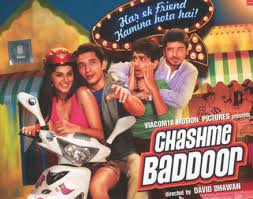 New Delhi: In 100 years of Indian cinema, this seems to be a first – a digitally restored version of the original 1981 film “Chashme Buddoor” will hit the screens Friday, along with its remake, David Dhawan-directed “Chashme Baddoor”.

The old version, which starred Farooque Shaikh, Rakesh Bedi, Ravi Baswani and Deepti Naval, was directed by Sai Paranjpye, and is being brought back by PVR Director’s Rare. Even after over three decades of its release, it is still the moviegoers’ favourite classic comedy.

But the buzz is also quite strong for its new version, which features Ali Zafar, Siddharth, Taapsee Pannu and Divyendu Sharma.

If recent reports were anything to go by, Paranjpye was not too pleased with the idea of a remake of her film. But Deepti has said the veteran director is just “concerned”.

“I want to respect her feelings… she is concerned how her film will be remade. But I feel that the fact that David saab wants to make the film again is a compliment,” Deepti said at a recent event.

Farooque feels it is important to restore classics such as “Chashme Buddoor”, and he has said he will go to the theatre to first watch the new version, and then watch his own film.

“I really want to see how David has made the film. I will go with my family to see David’s film first and then I will see my own film, which I have seen many times,” he said.

Dhawan has said his version is a tribute to late actor Ravi Baswani, who died following a heart attack in 2010. The comic director has even admitted that though the film carries the same soul as the original, it has a few slight changes.