Meena Patyal, one of the organizers for the event says, “we are trying to show case our rich culture and traditions by celebrating Himachal day in the bay area. It is a very humble effort to bring together our small but strong Himachali community and showcase our roots and heritage to our kids, family and friends.

The day event is slated to be celebrated at the India Community Center, Milpitas, California, close to world famous Silicon Valley in the San Francisco Bay Area.

Organizers of the event have also lined up a teleconference with Himachal chief minister Virbahdra Singh for the occasion.

Presence of dignitaries expected at the event include the Mayor of Milpitas Jose Esteves and Rajan Zed, who is a noted preacher of Hinduism settled in US, has appeared in US Senate as a guest Chaplain and has links with the Himachal Pradesh community. 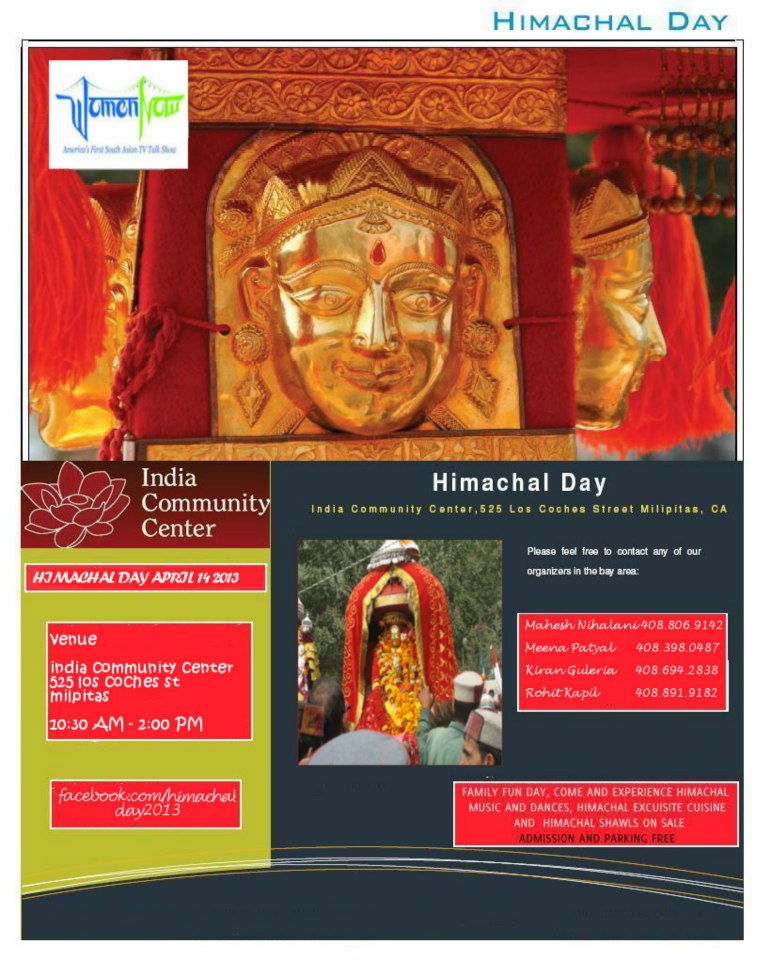 Rohit Kapil is scheduled to make an audio-visual presentation on Himachal Pradesh, Kamlesh Sood from Palampur unveils a book on poetry written by her and Asha Sharma would be delivering a talk about her biographical book on American missionary Samuel Evans Stokes, who on settling down in Kotgarh in Himachal Pradesh rechristened as Satyanand Stokes and pioneered the apple revolution, a fruit that the economy in the hills and has become the main cash crop of the state.

Other than engaging the younger generation with a brief interactive quiz on Himachal Pradesh, the lunch organized for the day would be serving delicious catered Himachali cuisine with delicacies like Chana Madra, Meethe Chawal, Khatta, Bhaturu, Sepu Badi, Gulgule and a host of other dishes.

On display at a sale counter there would be Kullu Handloom Shawls, Stolls, the Himachali cap and Kangra paintings by Akshai Runchal. Booths displaying Himachali artifacts, handicrafts, utensils, books and jewelry mostly from people’s personal collections would also be set up.

“No Himachal festivity is complete without dance, music and food and we expect about 200 to 300 people to turn up for the event, says Patyal.

We have put together a cultural program, presentations and a delicious 8  course Himachali thali to mark and celebrate on April 14th, the Foundation Day of our beautiful state, she added.

Uma Eshwar and group from Golden Tunes are to organize separate folk dances for children and adults at the event. Kanta Sood, Kamlesh Sood, Rekha and Kamini Sood would pitch in with a Kangri group song. Music by Des Kashyap would also be played.

Kiran and Ajay Guleria, Sneh and Devesh Sharma, Ashok and Pooja Verma and Neelam Madhaik would dance out to a lively Naati and Ajay Guleria,  Ashok Sharma, Naresh Chauhan and Meena Mehra are to sing folk songs at the event. Among the children Shaurya, Palak and Garima would display their budding dancing talents.