Gates, the founder of US tech giant Microsoft, said it was not often that you received a letter proposing to wipe out one of the most harmful diseases of the 20th century, especially when that missive was sent by the world’s richest man to the holder of the globe’s second-largest fortune. 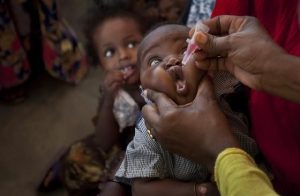 Slim, the world’s richest person, and Gates discussed their plans with EFE in the first-ever joint interview they have granted.

The moguls said they would work together to achieve one of the philanthropic goals set by Gates, the world’s second-richest person.

Slim will contribute $100 million to a project to eradicate polio within six years.

Why so much money and energy to fight an illness that affected just 223 children last year and is a problem in only three countries?

“With polio, there are two possibilities – either we redouble our work and really end it, saving ourselves the cost of vaccinations, or we halt this great effort and polio could start spreading once more and infecting hundreds of thousands of children,” Gates said.

Tremendous progress has been made in fighting this disease in the past 25 years, thanks to the immunization campaigns launched around the world.

Polio has gone from paralyzing 350,000 children a year in 125 countries to being a problem in just Nigeria, Pakistan and Afghanistan.

Slim and Gates are taking a business-like approach to fighting polio.

The Mexican and American billionaires agree that the worlds of philanthropy and business are “surprisingly similar” and have a hard time choosing one over the other.

“Perhaps the only difference is in the goals. In business, your goals are a bigger market share, profitability … But in both places you seek efficiency, organizing what you do well and that your human capital be the best,” Slim said.

“If we do not have success with polio, it would be a tremendous setback not just for global health, but also for optimism about what men can do when they work together. If we are successful, it will make us stronger and remind us that together we can do amazing things,” Gates said.