New Delhi: The puppetry tradition in Iran and India – two nations which share historical ties – have several similarities. Both assimilate from ancient folk cultures and use manually-crafted dolls as the core visual element of their theatres that date back nearly 5,000 years. 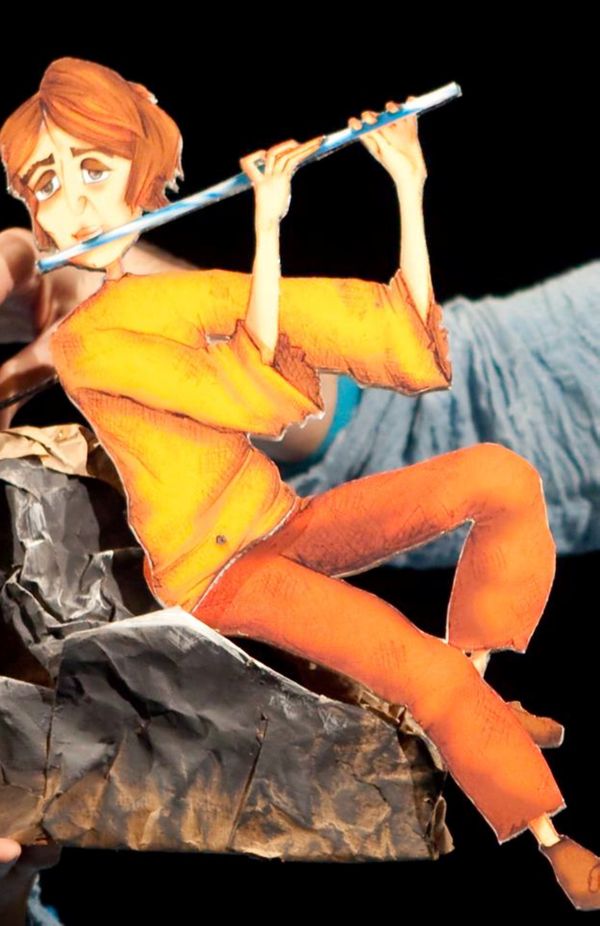 “I have researched the traditions of Indian puppetry. I think Iranian and Indian puppetry are similar in the sense that the traditions are several thousand years old dating to early history with folk-inspired stories. The materials used are similar and puppeteers in both countries use hand-crafted dolls and stage equipment. The tradition developed in Iran and India around the same time,” Hossein Cheraghi, the director of a popular Iranian paper puppet theatre, told.

Hossein is in India with his puppet repertory, The Puppet Theatre Group, to stage “A Musician Who Played the Moon”, a 50-minute family puppet theatre at the Ishara International Puppet Theatre Festival during April 8-15. “The history of puppetry in Iran is ancient – nearly 5,000 years old,” he added.

“The early inhabitants of the land made a lot of small puppets with paintings. Stones with paintings were used as puppets,” the puppeteer said. History says the earliest puppets were found in Iran and India.

A 5,000-year-old earthern relic, “Shahr-i-Sokhta”, found in Iran had five images of goats painted along its sides. Historians described it as the earliest recorded puppet that could be used as animation by spinning the object so that the goats appeared to be in motion.

The relic could be compared to the similar wooden human-shaped toys found in the Indus Valley settlements. Excavations have thrown up 3,000-year-old terracotta dolls with heads that could be detached or operated with a string and animals manipulated with sticks.

The two traditions found meeting ground in Indian trade with West Asia, cultural exchanges and the arrival of the Persian people in India, the puppeteer said.

Ancient puppets still live in modern Iran in Mubarak, a traditional doll made of wood.

“Mubarak is hand painted to resemble a man. It is usually attired in red and has a black face. The doll is similar to the marionettes found across the world…,” the Iranian puppeteer said.

“Mubarak plays to visitors on the streets. On the street, people often gather to hear Mubarak perform. A person sits behind Mubarak, speaks through him and even sings. He puts an object under his tongue so that it can speak in the doll language and translate it,” Cheraghi, who took up puppet theatre 10 years ago, said.

It is a difficult craft, but is worth the labour, the puppeteer said. “The traditional puppet theatre in Iran tries to bring peace in society with comedy. The stories narrated are rich in humour,” Cheraghi said.

The traditional puppets in Iran have a popular rating. While “Mubarak” tops the list in popularity, the red-and-black doll is followed closely in ratings by characters like “Pahlvan Kachal”, “Aghed” and “Salimeh Khanoon”. However, contemporary puppeteers are widening their repertoire and styles to combine traditional and western puppetry practises, Cheraghi said.

“We make paper puppets, paper sets, and use plastic paint to decorate the dolls. We adapt from foreign folklore and improvise on them in our traditions,” he said. “A Musician Who Played the Moon” is an adaptation of the Russian folktale, “The Sea King’s Daughter” about a young musician Sadko, who is invited by the King of Sea to play in an underwater dream sequence.

“Like Indian puppetry, we try to experience a lot of things through puppets. Stone and wood have character. All our troupe members paint – we are artists,” the director said.

Women are carving a large niche for themselves in Iran, says Maryam Teimouri, who translates the plays into English. A puppeteer by profession, Teimouri said “women are slowly outnumbering men in puppet theatre because their families don’t mind”.

“The general idea is that puppetry is meant for children, but we are not allowed to sing on stage,” she said.

The five-member troupe is keen to work with Indian puppeteers.

– (Madhusree Chatterjee can be contacted at [email protected])