Caracas: Venezuelan President Hugo Chavez lost his battle with cancer Tuesday at the age of 58. He died in a military hospital in Caracas, Vice President Nicolas Maduro announced on national radio and television. 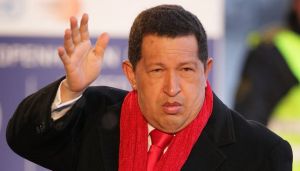 With tears in his eyes, Maduro addressed Venezuelans from the Doctor Carlos Arvelo military hospital, where Chavez passed his last two weeks after returning from Cuba Feb 18, Xinhua reported.

He called the event a “historical tragedy” and urged Venezuelans to be vigilant for the peace of the country.

Accompanied by key members of the Executive Cabinet, Maduro offered thanks to friends from other countries.

“In this time of sorrow, we thank you for your eternal solidarity,” he said.

He also called on the Venezuelan people of all political sections to unite together.

“Let there be no violence or hatred, but love, peace, unity and discipline,” Maduro said.

Meanwhile, Venezuelan Defence Minister Diego Molero Bellavia said in a statement: “The National Bolivarian Arms Force echoes the call for unity. We are being deployed to ensure the security and sovereignty of the Venezuelan people.”

Chavez was in power for 14 years. He was re-elected to a third six-year term in October 2012, but could not be sworn in as scheduled Jan 10 due to his serious health problems.

After seeking medical treatment for 70 days in Cuba, he returned home Feb 18. Since then, he was in the Caracas military hospital.

Molero appealed for “unity, tranquility and understanding” among Venezuelans and vowed that the military will remain loyal to the constitution in the wake of Chavez’s death.

Chavez had four operations for cancer and four courses of chemotherapy in Cuba and Venezuela within a year. His fourth operation, to remove cancerous tissue, took place in Cuba Dec 11, 2012.

Under the constitution, the head of Venezuela’s Congress, Diosdado Cabello, will assume the interim presidency before new election is held.

Maduro earlier said he had no doubt that “the historical enemies of the country sought for a weak spot to harm the health” of Chavez.

He insisted that in due time, a scientific commission will be formed to certify whether the president was attacked with the illness he has been suffering for almost two years.

Following the announcement of Chavez’s death, US President Barack Obama issued a brief statement reaffirming US support “for the Venezuelan people and its interest in developing a constructive relationship with the Venezuelan government”.

“As Venezuela begins a new chapter in its history, the US remains committed to policies that promote democratic principles, the rule of law, and respect for human rights,” the statement said.

Both she and her late husband, Nestor Kirchner, were close friends of the firebrand Venezuelan leader.

In Peru, Congress held a minute of silence in his honour. Bolivia’s President Evo Morales said he was leaving immediately for Caracas.

The governments of Chile and Ecuador also released official notes of condolence to Venezuela while Ecuador said it felt the loss as its own, and hoped its neighbours could carry on Chavez’s revolution.

British Foreign Minister William Hague said he was “saddened” to learn of the death, saying Chavez had left a “lasting impression” on Venezuela.

UN Secretary General Ban Ki-moon offered his “deepest condolences to the families and people and the government of Venezuela” and noted Chavez’s contributions to his country’s development.

“This death should fill all Latin and Central Americans with sadness,” she said. “Hugo Chavez was without doubt a leader committed to his country and to the development of the people of Latin America.”

She added that on many occasions “the Brazilian government did not agree totally with Chavez” but always recognised him “as a great leader” and regarded him as “a friend of Brazil and the Brazilian people”.

“He was a great politician for his country, Latin America and the world,” he said.