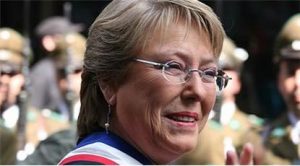 “Michelle Bachelet has informed me of her intention to step down as executive director of UN Women,” Ban said in the statement issued by his spokesman Friday.

Bachelet, a former Chilean president, is the first UN under-secretary-general and executive director of UN Women, which was established on July 2, 2010 by the UN General Assembly, reported Xinhua.

Bachelet, who was born in Santiago Sep 29, 1951, is a pediatrician and public health expert.

UN Women brought together a variety of UN agencies and departments and consolidated them under one roof. The agency bills itself as the UN “entity for gender equality and the empowerment of women”.

“I would like to express my tremendous gratitude for her outstanding service,” Ban said of Bachelet, who took up her pioneering position at UN headquarters in 2010. “Michelle Bachelet was the right person in the right job at the right time.”

Bachelet recently topped a poll in Chile of possible presidential candidates in the South American country.