Ram Gopal Varma is all set to recoup his Midas touch of the late 90’s with his new crime-thriller based on real incidents —-The attacks of 26/11. It was a tricky theme to reinstate in the form of a movie; kudos to the film maker for his dauntless effort.

It’s fairly easy to burn your hands completely trying out on such out-of-the-box notions as majority of such gambles go horribly wide off the mark. 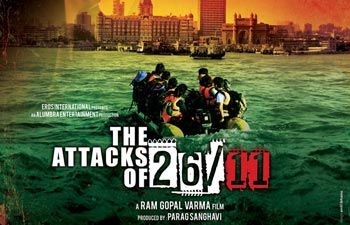 Interestingly, it can’t be better elucidated by any other than the director post his box office dud——Ram Gopal Varma ki Aag.

However, Ram Gopal Varma pulls out the story very well and recreates the frightening night of 26/11 in Mumbai all over again. It can easily be pigeonholed as the finest movie based on the plot of terrorism in the recent past.

It takes something special to re-create the whole plot by just using two lead characters mainly.

The movie embarks on with the entry of water boats in the Indian Waters carrying terrorists of Pakistani origin. Once they penetrate the financial capital of India, their terrorizing killing-spree begins.

The movie pertinently showcases how Ajmal Kasab, the role donned by debutant Sanjeev Jaiswal and his group carries out the carnage in the Taj Hotel, Victoria Terminus, Leopold Café and Cama Hospital.

The movie glass-cases the whole account in the words of then Mumbai Joint Police Commissioner (crime) Rakesh Maria played by Nana Patekar.

He is depicted briefing the probe committee about the details of the night in the backdrop, post-attacks.

The movie ends with the hanging of Kasab on 21st November, 2012 in the Yerwada jail of Pune.

It is a warily drafted film that is reserved in its depiction but captures all the details comprehensively in a short duration of around 2 hours. The crime-thriller has been astutely re-constructed in the form of documentary so that it doesn’t lose on the factual reality that is difficult to pull out in the time-honored Bollywood mode. The director deserves accolades for thinking out of the block.

The movie lacks sufficient dialogues in the first half and becomes a bit listless in some scenes. However, once the bloodshed on 26/11 embarks on, the sequence of events totally grips the audience.

Barring some forcibly incorporated scenes, the plot is nimbly assembled.

Nana Patekar is highly self-possessed from his accustomed approach but the role demanded such and he pulls out well. The debutant Sanjeev Jaiswal is sparkling. The way he takes over the plot in the second half from silent enactment in the first part is consummate.

The scene picturized in the morgue is the best and transports out the best from Nana. It utterly puts the plot on fire and is the uppermost point in the movie.

It is so elevating to onlook how the top cop brings out the bona fide meaning of “Jihad” and “Islam” to the terrorist and guarantees that every spectator returns home well clear about the significance as well.

The movie is evenhanded in its advance and evidently transmits mind of Kasab during interrogation scenes rendering that he is mere glove-puppet in the hands of mischievous sprites.

The concluding scene where Kasab gets hanged is so well researched and accomplished that it sends out shivers in the spine just re-collecting what must have gone through his mind that point of time.

No movie in the near past has penetrated so profoundly and put all the facts on board so immaculately.

The background score is just middling and the only song by Sukhwinder Singh running throughout in the background is unconvincing.

The film surely sends an undertone and should be treated differently than any another flick by the national audience.

It is very difficult to predict the road ahead for the movie on the box office in absence of any major star cast and RGV’s dicey affiliation with the majority of mainstream media.

Nevertheless, it deserves the same critical acclaim as it collected in the Berlin International Film Festival.