New Delhi: The Supreme Court Monday said that Italian ambassador Daniele Mancini will not leave India till further orders, and directed authorities to ensure compliance with its order of March 14.

The court had, March 14, restrained Mancini from leaving India. 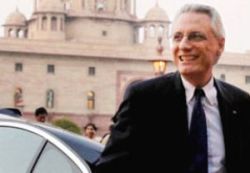 The action follows Rome’s refusal to send back the two Italian marines Massimiliano Latorre and Salvatore Girone to face trial for killing two Indian fishermen, Ajesh Binki and Valentine, off the Kerala coast Feb 15, 2012, mistaking them for pirates.

The court will hear the case next April 2. India and Italy are locked in a huge diplomatic row over the issue.

The court while extending its earlier order restraining Mancini from leaving the country said the Italian envoy has lost its trust and does not have diplomatic immunity.

The apex court bench said: “Some people are writing that we are naive. We don’t expect the republic of Italy to behave like this. What do they think about our courts and judicial system? We don’t accept any assurance from you that you don’t intend to leave (India). You have lost our trust.”

The court said this as Attorney General G.E. Vahanvati took it through the sequence of events leading to the court permitting the two Italian marines to return to their country for four weeks so that they could exercise their franchise in Italy’s national elections and be with their families.

As Vahanvati mentioned the assurance given by the Italian ambassador assuring the court of the return of the two marines, the court said that its orders permitting the two marines to go back to their country for four weeks are yet to be violated, as the deadline for them to return was fixed for March 23.

Italy claims the shooting incident occurred in international waters and wants to get Latorre and Girone tried in its courts.

India says the trial should occur here, and set up a special court in the national capital to try the case.

The court brushed aside senior counsel Mukul Rohatgi’s contention that Mancini enjoyed diplomatic immunity and said that he had given an assurance, and that has to be honoured.