Aristocracy has always been a burning soul to myriad plots in Hindi movies. Where Lords and ladies play protagonists in the story, the backdrop builds up vibrant and surely more superlative.

Consequent to Saheb Biwi Aur Gangster (2011), the sequel takes the story frontward from where it was left, the last time. 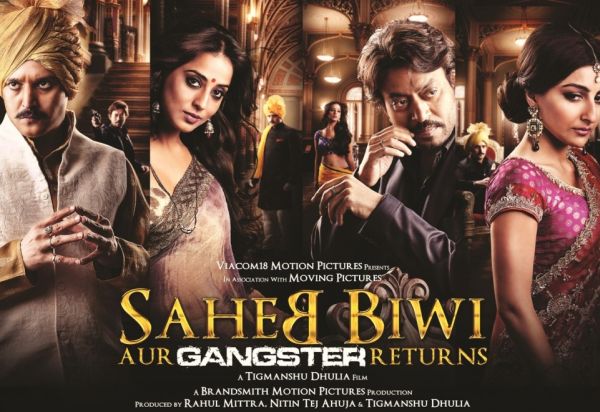 Full of fixation, grubby play, seduction, politics and mind games; Tigmanshu Dhulia narrates a revenge thriller encompassing “double love triangles” in a noteworthy way. Unlike other gangster movies in Bollywood, bloodbath has been restrained to some dot, intelligently enough.

The endowed storyteller who played Ramadhir Singh in Gangs of Wasseypur has unquestionably come a long way since the days of Star Best Sellers and Haasil.

The story is woven around the life of Saheb/Aditya Pratap Singh who is cramped to wheel-chair due to an accident he had in the first part. He is mired into all sorts of shadowy deals in order to maintain his degenerating grandiose lifestyle of a Maharaja ranging from contract-killings to politics. His wife Biwi/Madhavi who is also a MLA from the area is shown once again to be enduring with her incredulous ways in craving of cash and eminence. Gangster/Inderjeet Singh is the third generation member of a royal lineage that was destroyed by Saheb’s ancestors. In order to seek retribution, he masterminds an intriguing plot to settle score with Saheb.

The narrative is gripping especially through the first half. The second part appears to be a bit lethargic and the reason being the impeccable execution of the half, raising more expectations from the second.

Jimmy Shergill in the role of Saheb is spellbinding and showcases all the charm in the usual kingly ways.

The movie would be a turning point in his life, indubitably. His restrained portrayal of the role needs applause. His dialogue “jante ho mard itni galiyan kyun dete hain…kyunki woh rote kum hain” fires up the cinema hall into approbation.

Mahie Gill as Biwi, a gift of Anurag Kashyap to Bollywood is radiant in her lusty, fickle and infidel ways. She spreads the bouquet of her seductive passion all through the movie. Her drunken enactments and dialogue delivery is flawless especially “humen mard hi kyun milte hain….shayar kyun nhi milte.” Somehow, she reminds of the legendary actress Meena Kumari on some occasions.

Irrfan Khan as Gangster was consummate. Irrfan replaces Ranbir Hooda in the sequel.  He is one of those characters in Hindi cinema that are always rooted for irrespective of the storyline. It is well known that his involvement with Tigmanshu initiated since the days of NSD and worked collectively last time in Pan Singh Tomar. Irrfan’s performance is entrenched with his trademark witty ways especially the dialogue “Hamari gali pe bhi taali padti hai”   generated loud whistles from one and all.

The particular scene where he impersonates as a journalist to interview a prominent politician who is busy watching pornography on his laptop sets everyone into splits.

Soha Ali is highly refined and justifies her attendance in the film utterly.

Debutant Parvesh Rana (from the show Emotional Atyachar) is an admirable find.

The cinematography is special and dialogues by Tigmanshu are uncharacteristic and very gripping.

Music by Sandeep Chowta in the film takes a leaf or two from Gulaal. The item number by Mugdha Godse is integrated forcibly like all other movies nowadays.

The culmination sequences are crumb unclear. The twists are way too abundant and can bamboozle anyone. It becomes so very unclear what Irrfan was set to accomplish and what he achieves finally. It should not be a shocker if next follow-up to the movie finds its place in the coming months.

Nevertheless, the movie lacks essence of the preceding version but indubitably a onetime watch.