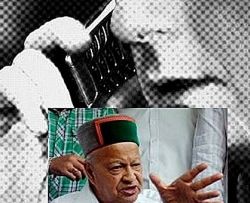 He even blamed the previous regime for unauthorised surveillance of telephones.

His predecessor Prem Kumar Dhumal, however, dared him to prove his accusations. “If found guilty, hang me,” Dhumal retorted.

The budget session of the assembly began on a stormy note this week, with the treasury and opposition benches trading allegations and counter-allegations on phone tapping.

“The police are expected to be impartial in their dealings. However, during the tenure of the previous government, the police were virtually converted into the Gestapo,” Virbhadra Singh said during his budget speech Thursday.

He said some of the police personnel were involved in unauthorised phone tapping and fabricating cases.

Making a statement in the assembly Tuesday when the BJP moved an adjournment motion on phonetapping, the chief minister said interception of phones could be ordered only in extreme cases.

Justifying the government’s decision not to reveal information about the case, Virbhadra Singh said under the Right to Information (RTI) Act, information supplied to legislators cannot be denied to any citizen.

“If members are provided information, it would have to be supplied under the RTI Act to applicants for all time to come,” the chief minister said.

He said this situation had the potential of compromising the investigation of crimes and security and integrity of the country. It was privileged information as per Section 4 of the Indian Telegraph Act, which could not be disclosed.

His statement came when the opposition created a ruckus in the house, alleging that the chief minister and other leaders have made contradictory statements outside the assembly about the 1,600 phones being tapped.

The BJP also took exception to Virbhadra Singh’s media briefings, during which he held that Dhumal was behind the controversial episode. The saffron party dropped its demand for a debate on the issue when Speaker B.B. Butail informed the house that certain legal provisions prohibited disclosure of information till the completion of the probe.

“We have accepted the speaker’s ruling but other options, including legal recourse, are open,” Dhumal told.

Rejecting the allegations, he said no phone tapping was done or ordered during his tenure as chief minister.

“We have been demanding a probe by a sitting high court judge so that action could be taken against the guilty, but the government is shirking from that,” Dhumal added.

He noted that even during Virbhadra Singh’s tenure in the past, the conversation of the then chief secretary and a politician was recorded on an audio CD that surfaced in 1990.

“Does this mean that Virbhadra Singh as a chief minister was responsible for it,” Dhumal asked.

The computers in the CID and vigilance bureau offices were seized on the night of December 24-25 last year, hours before Virbhadra Singh assumed charge as chief minister.

The chief minister has already said action will be initiated against all those, including mobile phone companies, who were involved in the surveillance of phones.

He said last week that 1,371 phones were tapped. Of these, the home department had granted permission to tap only 170 phones.

Virbhadra Singh accused the previous government of tapping his phones and bugging his rooms.

Official sources said most of the illegally recorded conversations were of politicians, mainly Congress leaders, when they were in opposition. The conversations of some bureaucrats and journalists were also tapped.