Shimla: Chief Minister Virbhadra Singh is at the receiving end of the opposition’s ire, thanks to the seeming indifference of the railway ministry towards Himachal Pradesh in allocating new projects. 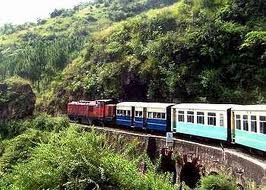 As Railway Minister Pawan Kumar Bansal presented his budget in the Lok Sabha Tuesday, the opposition pointed out that the railways had been tardy in making budgetary provisions for timely completion of ongoing projects in the state.

Virbhadra Singh, who is currently serving a sixth term as chief minister, has not made things easier for himself. He has, in the past, claimed that the state would ride a “reform express”, with a little assistance from the Congress-led government at the centre.

This assurance of aid from the centre, the opposition has claimed, does not seem to have borne fruit.

Virbhadra Singh’s predecessor Prem Kumar Dhumal of the BJP said: “The central government has been discriminating against us since independence. This time too; even though there is a Congress government in the state, the discrimination continues.”

Dhumal, who has served two terms as chief minister, said the demand for developing the Bilaspur-Manali-Leh rail line was genuine as it is strategically important.

The proposed 460-km line will connect this hill state with the Ladakh region of Jammu and Kashmir, adjoining the China border.

Official sources said since assuming office Dec 25, 2012, Virbhadra Singh and his colleagues have been lobbying hard with New Delhi to get central projects to improve infrastructure and connectivity in the state.

According to an official, the chief minister had personally taken up the issue of delayed projects with Bansal.

Among the chief minister’s demands were adequate funds for timely completion of the Nangal-Talwara rail line and a survey for extending the Bhanupali-Bilaspur line till Mandi and beyond, to join the existing Pathankot-Jogindernagar line.

The chief minister had also sought early execution of the Ghanauli-Baddi-Kalka and Chandigarh-Baddi lines to boost industrial activities in the state.

Bansal, in his budget, gave one new train to the hill state and announced that surveys would be conducted for Amb-Kangra via Nadaun, Baddi-Bilaspur and Dharamsala-Palampur rail lines. A skill-development centre to train young people in railway-related trades is also proposed for Shimla.

Thanking Bansal for proposing the surveys, Virbhadra Singh said in a statement that the lines would provide an impetus not only to economic and tourism activities but also go a long way in boosting industrial activities.

Official sources said the chief minister was expecting the announcement of at least a rail link between the industrial township of Baddi and Chandigarh, via Kalka. This would involve constructing a 15-km line.

“For providing rail connectivity with Baddi, a number of surveys have been conducted. But somehow it has not materialised,” said an official who did not wish to be identified.

The former chief minister said surveys for the Baddi-Kalka rail line had been completed and the report submitted in April 2011.

There is light at the end of the tunnel, though, as Bansal has said that the recommendations of a parliamentary committee on taking up the proposed Bilaspur-Manali-Leh rail track would be pursued because of its strategic importance from the defence point of view.

“Despite the strategic importance of the Mandi-Manali-Leh rail line, the central government has been indifferent towards its construction,” BJP vice president Shanta Kumar, who belongs to the hill state, said after the railway budget was presented.