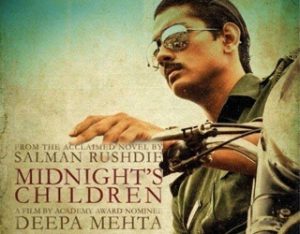 Mehta and Rushdie, who also adapted the screenplay, producer David Hamilton, cast members Sarita Choudhury and Samrat Chakrabarti, too would be in attendance, according to festival organizers, the Indo-American Arts Council (IAAC).

Paladin and 108 Media will be officially releasing “Midnight’s Children” in major US cities starting in New York City on April 26.

Mehta, who returns to NYIFF after her Oscar-nominated film “Water” opened the film festival in 2005, said: “We have had a very long and creatively fruitful relationship with NYIFF. ‘Fire’, the very first film in the elemental Trilogy was shown there and almost every film I have made since.”

“It is enormously pleasing for me to be once again collaborating with NYIFF and bringing to their extremely discerning audience “Midnight’s Children”, a film that I have been dreaming of doing since I first read the book over 30 years ago,” she said.

“Midnight’s Children” tells the magical, wide-spanning story of how two babies, born within moments of India proclaiming Independence from Britain, are switched at birth and are forever marked by history.

Long-time supporter of NYIFF, Salman Rushdie also narrates the film. “I’m delighted the film of ‘Midnight’s Children’ is to be given this preview screening in New York by my old friends at NYIFF,” said Rushdie.

“Midnight’s Children” has played at festivals worldwide to much critical acclaim.

Widely recognized as the premiere showcase of groundbreaking Indian cinema globally, IAAC’s NYIFF will announce the full line-up of screenings and events for the festival by March 22.

The oldest and most prestigious Indian film festival in the US, NYIFF is dedicated to showcasing, promoting and building an awareness of Independent, art house, alternate and diaspora films from/about/connected to the Indian subcontinent.