Seldom does Bollywood appear so candid about the Indian Judicial System as in the hottest release, Jolly LLB. To top it all, a take on the judiciary with a casing of lampoon can spell trouble for anyone.

However, not for Subhash Kapoor whose latest flick (after a rib tickling Phas Gye Re Obama) is a statistic film, successfully draped around a serious plot. His directorial debut was in fact Say Salam India in 2007. 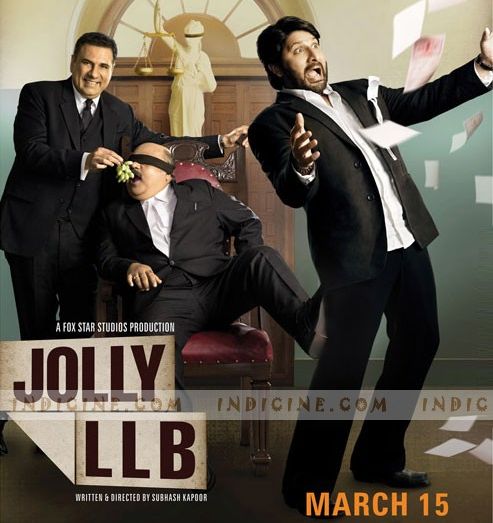 Mind it; plucky subjects can also be proffered in a subtle way without any distasteful inputs involved.

Jolly LLB showcases all the loopholes existing in our laggard judicial system that present an easy escape to the rich after committing crimes in the broad daylight (or night, as in the movie).

Storyline is weaved around the famous Sanjeev Nanda BMW hit and run case.

It presents the lacking infrastructure in courts, collusion of police and defense counsel of accussed (rich brats), inadequate security to witnesses and unholy game of hush money. The “out of court settlement” issue has also been raised fairly well. The plummeting quality of the lawyers is well showcased in a scene where one lawyer asks his counterparts, how the word “affidavit” is spelled.

Jagdish Tyagi alias Jolly is a small time lawyer who relocates to Delhi to grant some impetus top his mundane career. Sandhya, the girl in his life opposes but he is adamant on his decision.

Suddenly, his life takes an unanticipated turn. The missing prime witness arrives on the scene after he files Public Interest Litigation (PIL) in the famous Land Cruiser hit and run case, seeking its re-opening.

The story begins and Jolly wages a war against the defense counsel of the accused, Tejinder Rajpal, the famous lawyer, regarded as unconquerable.

Boman Irani is a perfectionist in his lawyer ways. Despite sparkling ways, he is a bit restrained here as compared to his astounding roles in Munnabhai MBBS and 3 Idiots.

Justifiably so, as his mere presence is enough to overshadow the storyline, absolutely.

Arshad Warsi is good with his sharp ways much better than Zila Ghaziabad.

Amrita Rao as Sandhya (Arshad’s lady love) is too busy beating dirt out of the hanging carpets and evaluating copies of school students in the film. She is as invisible as the Meerut city in the backdrop of the movie.

Saurabh Shukla (Justice Tripathi) steals the show single handedly. He brightens up the serious courtroom drama with his amusing maneuvers.

Pankaj Mishra in a cameo is humoristic in his own trademark ways.

The court room scene in the beginning of the movie is too overdone.

The storyline is too predictable and the ease with which Jolly unearths the missing links in the case is bit overcooked.

Manoj Pahwa as brother-in-law to Jolly seems too bighearted in distributing money to the touts. Amusingly, Jolly’s sister is missing throughout the screenplay as is Amrita Rao’s father, except in one song sequence.

His initial days in journalism appear to help him here.

“Janab”, the word both the lawyers use to address the judge, seems very fascinating.

With this new crop of talented filmmakers all the veteran theater artists that remained ignored until now are finding screen space, although cameos might be.

One such example is Brijender Kala who was visible in the initial part of the movie advising Jolly “recession ka zamana hai, typewriter bhi chori ho rhe hain.”

The only department where the movie lacks is music.The lyrics are pitiable excluding the score by Kailash Kher —“Kaua chala hans ki chal”. Songs are integrated forcibly as in all the movies nowadays.

In short, the movie is a must watch.