“Following diplomatic contacts #Italy informed that Marines will return to #India in accordance with timeline provided to Supreme Court,” the external affairs spokesperson Syed Akbaruddin said in a tweet post. 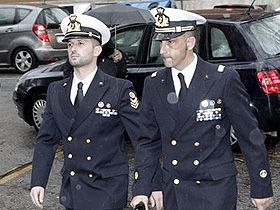 The Italian ambassador Daniele Mancini had given an undertaking to the Supreme Court that they would return to India by March 22 after voting in the elections.

But on March 11, the Italian embassy informed India that they would not be se3nding the marines back to face trial, leading to a diplomatic stand off with Italy. The ambassador was restrained by the apex court from leaving India.

The marines — Massimiliano Latorre and Salvatore Girone — had been allowed by the court on Feb 22 to leave India to vote in Italian national elections, with the promise that they would return in four weeks to face trial.

Italy’s refusal to send back the two marines had caused a political storm in India with opposition parties slamming the government for its handling of the issue.

Prime Minister Manmohan Singh had assured that the government would do “whatever needs to be done” to bring back the two Italian marines.

“No country can, should or will be allowed to take India for granted,” she had told Congress MPs March 19.

“All means must be pursued to ensure that the commitment made by the Italian government to our Supreme Court is honoured,” she said.

“The defiance by the Italian government on the question of the two marines and its betrayal of a commitment to our Supreme Court is outright unacceptable,” the Italy-born has said.

The Italian marines were on anti-pirate duty aboard cargo ship Enrica Lexie off India’s coast in Kerala last year in February when they shot the two fishermen, mistaking them to be pirates.

Italy insists the shooting happened in international waters and New Delhi does not have jurisdiction over the matter.

NPR News agency quoted the Italian government as saying: “The Italian government has requested and obtained from the Indian authorities written assurances as to the treatment of the marines and the protection of their fundamental rights,” Prime Minister Mario Monti’s office said in a statement.

As a result of the assurances, the marines agreed to leave Italy March 21 night to return to India by March 22, the original deadline for their four-week home-leave.

The two men will reportedly stay at the Italian embassy in New Delhi during the legal proceedings, NPR reported.