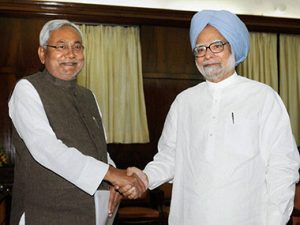 The recent Adhikar rally by Nitish Kumar at the Ramlila Maidan in Delhi attracted a lot of media attention nationwide because of massive volume of supporters from Bihar joining the cause. The after-effects of the gathering are still to be experienced but the convention was surely more than plain struggle for Bihar’s rights.

To make issues more transparent, it was a well documented program by Nitish Kumar to put forward his stake  and present himself as a likely candidature for the Prime Minister’s post in the forthcoming Lok Sabha polls.

It is evident that Narendra Modi is certain choice of BJP in the coming Parliamentary elections, even though we’ll have to wait a tad longer for an official announcement from the party. Therefore, National Democratic Alliance (NDA) as a whole is forced to support his candidature, as BJP’s say matters the most because of it being the single largest party in the coalition.

However, Nitish Kumar, the face of BJP-JD (U) coalition in Bihar thinks otherwise. Himself a firebrand leader and no way less than Narendra Modi in political acumen, Nitish has earned an image of a straightforward leader who has significantly revived the near collapsed economy of India’s poorest state over the years.

Thus, Nitish stands a fair chance to challenge the credentials of Mr. Modi at the highest level.

Some political pundits rate him higher than Modi due to his considerable efforts to provide an impetus to the struggling economy of Bihar that he inherited from the pathetic era of misgovernance by Lalu Prasad Yadav. On the other hand, Modi’s Gujarat has always been a flourishing economy even in the governments before him.

This makes Nitish a fitting candidate who could seriously challenge Modi at the national level owing to his popularity and secular image.

In the recent rally at Delhi, Nitish Kumar clearly indicated that his party would not mind siding up with anyone who promises to provide Bihar a special status after elections in 2014. This has been received well in the UPA circles, and Congress leaders are more than pleased to pronounce encouraging words about Nitish’s model of development every now and then.

The other interesting facet of the story is that UPA lacks a leader who can lead successfully this time in the Parliamentary elections in 2014 – Manmohan Singh clearly lacks authority, Rahul Gandhi is too reluctant to run for the top job and P Chidambaram doesn’t look a mass leader by any sorts.

Therefore, siding up with JD (U) is not a bad option in any case. Importantly, UPA doesn’t even have MNREGA to win over massive rural votes this time around, as was the scenario the last time. Nor can it afford a similar welfare scheme due to the sluggish status of Indian economy currently.

For that reason, Congress would surely try to support Nitish’s candidature to counter Modi’s rise in order to please its Muslim vote bank. Also, in order to compensate for the Muslim votes in form of SP who Congress can easily afford to lose if Nitish joins hands.

Therefore, the 20 MP’S of JD (U) could be highly effective against the regular blackmail from Samajwadi Party. The loss of 19 MP’S of DMK has further strengthened Nitish’s case.

It wouldn’t be out of the blue if Nitish is proposed as the next PM candidate by UPA.