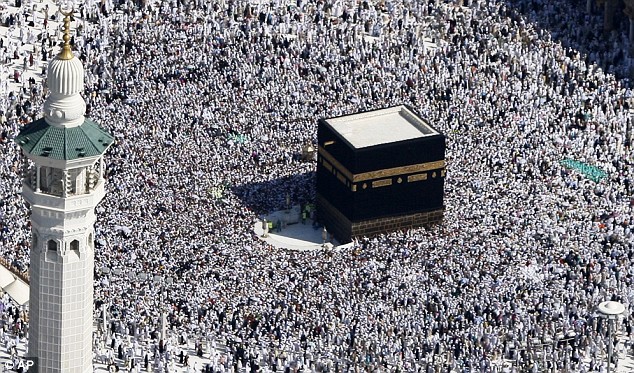 New Delhi (IANS) India has sought an increase of 10,000 in this year’s Haj quota. The request was made by Minister of State for External Affairs E. Ahamed to Saudi Haj Minister Bandar Najar, when the two met in Jeddah.

“We requested the minister to accommodate an additional 10,000 people this year,” an official accompanying Ahamed said, over phone from Jeddah, where the ministers met Saturday.

Every year, India sends 170,000 pilgrims for the Haj. This year, Haj falls in October.

In view of high demand for the pilgrimage, the Indian government urged Saudi authorities to increase the quota of pilgrims.

However, it appears like the Saudi government might find it hard to accede to India’s request, as there is a heavy rush of pilgrims from all over the world.

Last year, over 3.5 million pilgrims performed the Haj. The pilgrimage is one of five “pillars” of Islam, and the faithful are encouraged to perform it at least once in their lifetime.

The Saudi minister assured Ahamed that he would consider the request favourably.

The two ministers also discussed arrangements for the Haj as well as the facilities provided to Indian pilgrims during their 30-day stay in the Saudi kingdom.

Saudi authorities have undertaken massive expansion plans for the two holy mosques, which are expected to be completed in two years. Once expansion work is complete, the mosque in Mecca would be equipped to accommodate more than 1.2 million pilgrims at one time.

This year, 125,000 pilgrims will go to the Haj through the Haj Committee of India (HCI), while remaining pilgrims will make it through various private tour operators.

The government has made it clear that pilgrims cannot go to the Haj through the Haj Committee of India more than once.

The Indian government provides huge subsidy to pilgrims who travel through the Haj Committee of India.

The centre offers around Rs.600 crore in subsidy for the travel of the pilgrims.

Pilgrims are ferried by Air India, which also hires the services of Saudi airlines to carry pilgrims in more than 300 special flights to Jeddah and Medina.