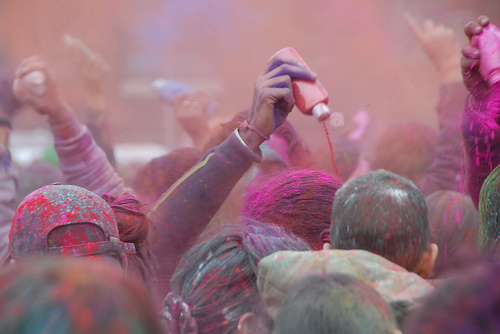 New Delhi: A penchant for life in technicolour with a dash of herbal colours, crunchy gujias, chilled thandais and soulful ghazals: the heady cocktail is proving to be an irresistible draw for foreign tourists to celebrate Holi in India, say tourism industry experts.

Despite the relatively subdued scenario owing to incidents like the Delhi gang-rape, and rising airfares, north Indian cities like Mathura, Varanasi and Jaipur have managed to attract foreigners like a moth to a flame.

[box]”The situation is a bit subdued this year due to the rape incident and increasing airfares. Yet foreign tourists are opting to celebrate Holi with locals in cities like Mathura, Vrindavan and Varanasi,” Gour Kanjilal, executive director of Indian Association of Tour Operators (IATO), told IANS here.[/box]

“They find the atmosphere here charming during Holi. The food like gujias, drinks like thandais and ghazal music, draws them despite safety concerns,” Kanjilal said.

What fascinates them the most, according to pink tour operator Rajat Singla of Pink Vibgyor, is the cultural connect.

“They like to explore the festive culture. We direct our tours to cities like Jaipur so that they can get a first-hand experience of the celebrations aided by a guide. They come from places in Europe and the US,” Singla said.

“They are very eager to participate and so we provide them with white kurtas and herbal colours as well,” Singla told IANS.

Indeed, Mexico resident, Katja Gaskell, co-founder of globetotting.com, an online travel portal that caters to families, says in her blog: “Do like the locals – and Bollywood stars do – and buy white ‘Holi kurtas’ for the family to wear. All the better to see the colourful mess with!”

Kanjilal adds that some travellers camp out on their own in Holi hot-spots like Mathura and Vrindavan.

“Some just go with their back-packs, all alone, without travel guides and mingle with the locals. They camp out during the days of the festival and participate at the grass-root level,” said Kanjilal.

According to Kanjilal, those who are really interested try to experience the different types of Holi in various cities of Uttar Pradesh.

“Those who are really interested are already here. They go to places like Barsana, near Mathura to indulge in Lathmaar Holi where people hit with sticks. They experience Holi in small adjoining towns like Govardhan etc. They embrace the riot of colours,” said Kanjilal.

“Overseas travellers are apprehensive of going out in the streets as it goes rowdy and wild during Holi. They like to play within the controlled atmosphere of the hotel they stay in. We make arrangements for them to play Holi within the premises,” Terapanthi told IANS.

During Holi, Gaskell’s globetotting.com arranges tours provides accommodation in hotels in Jaipur, that are heritage properties marking “the festival of Holi in a safe, family-friendly environment’ as the ‘city streets can get a little crazy”.

Besides the shower of colours and sprinkling of multi-hued water, the Elephant Festival of Jaipur on Holi eve is another spectacular aspect that foreign travelers love, says IATO’s Kanjilal.

“North India is the centre for Holi celebrations. In Jaipur, in western India, Elephant festival (cavalcade of brightly painted elephants) is very popular among foreigners,” he said.

Kanjilal says: “Not only travellers, we get requests from foreign journalists and photographers. The riot of colours is a golden chance for them to capture the ‘Incredible India’ experience.”