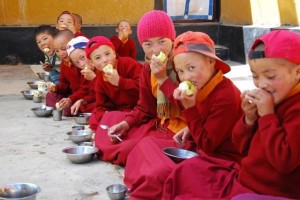 Last week when schools reopened across Himachal after the winter vacations, seeing little children all dressed up in their new uniforms, showing off their new school bags, transported me over half a century back to my own early days in school. March in those days was full of bright and sunny days, I recall. With Spring in the air and the excitement of that ‘looking forward’ feeling; new uniforms, new school bags, books, copies, lead pencils, rubber and sharpner and coloured pencils or paint boxes. Covering the new books and copies with brown paper, sticking name labels on them and getting elder siblings to print our names on them was such fun. How we admired our new possessions!

The first few days in school were terrible of course. The slowing of pace, that sinking feeling and clutching more tightly of Dad’s or Mom’s finger as the school gate neared. The welling up of tears when that finger was finally eased from your grasping hand and you were gently shoved towards a new, unknown world! The teachers were alien, nuns in my case, and spoke only in English that was incomprehensible. The secret resolves to never go to school again.

That feeling, of somehow ‘getting away’ from school lingered for quite a while!  I remember the day I actually ran away from school and hadn’t got too far when I ran into my aunts, was caught and asked why I was not in school. I said that the senior girls had a football match and so we were let off. My aunts started laughing loudly and said that girls playing football was unheard of (in those days) and that it must be a basketball match. I was let off then but the incident became a joke on me in the entire mohalla and was narrated to guests with much mirth for many years. What explanation was given to the nuns the next day I do not remember, but day boarders were thereafter not allowed to go near the school gates during school time.

It was a girl’s school that I had been admitted to, a fact that I tried my best to hide. Other boys of the mohalla would often tease me on that score and how I yearned to get into a boy’s school. Our school in those days allowed boys till class three only. It somehow happened that this condition skipped me and my parents and I landed up in class IV as well. When the nun came into the class she was shocked to see me there, their Order probably having pegged the age of innocence at eight years.  She at once took me away to the Mother Superior who without further ado telephoned the Principal of the counterpart boy’s school and I was sent there forthwith without my parents knowing what happened. I not sure though that the girls in my class were pleased with this development as an incident many years later would show.

Much later in high school with freshly sprouting moustaches and yearnings of a different kind, I would boast to class fellows of my years in that girl’s school. On the occasion of one inter-school debate fortunately some of the girls from those early years not only remembered my name but recalled how much fun we had back then and how I had left without saying goodbye and that I should come and visit them more often. When the other boys in our debating team heard this, my stock in the class went up suddenly with some of my envious classmates asking me for suitable “introductions”!

Unlike little school kids now-a-days, we did not have to carry books and homework to school. Our bags had lunch boxes and may be pencil boxes. Home work started in later classes. During the Monsoon, umbrellas or rain coats were essential. Soon after I joined school, I was presented a small rainbow coloured umbrella which though good for my size, was ineffective against the Simla monsoon. One morning while going to school I got thoroughly drenched and was packed off by the nun to the boiler room. The matron there, an aging be-spectacled Anglo, yanked off all my clothes and made me stand naked next to the boiler to keep warm. After a while a couple of senior girls turned up in the boiler room and seemed to be mighty amused to see a naked, wet, little boy who didn’t know where to look!

There was another boy in our girl’s class, handsome and effeminate.  He would come to school in a big, black car with an Alsatian and a servant carrying his bag and huge tiffin carrier. I later learnt that he was the son of a General who had probably married late. He had two elder sisters, also in our school and would be anxious about them not seeing him go to a panwari’s shop (outside our school) with me. I would coax him to come there so that we could buy some toffees or lollipops with his money. He would enjoy those hugely and despite his anxiety would be keen on a trip to the shop. One day his sisters caught him and said they would tell mommy. The fellow (I have forgotten his name) started crying and I had to intercede and told his sisters that it was my birthday and I was going to buy him a lollipop. They pulled him away nevertheless; cruel girls. Anyway, whatever must have happened at their home, I was informed by my friend that his mommy had called me for lunch the next day and that he would take me in his big, black car. What excitement!

On arriving at his house, I recall asking if we would have jelly for lunch. He said yes and had asked that the jelly be set in a fish mould, which he knew I liked so much, having shared it with him often out of his tiffin box lunch at school. His mommy came and inquired if I had had an omelet. She gave me a big chocolate which I carried home and shared with my mohalla friends who were awestruck with my half imagined stories of my friend’s big house and whose father was a General.

In those days when convents were highly anglicized, we were taught Hindi by a British teacher. We were too young to laugh at the idea, but I remember how many of the girls would innocently keep correcting Miss Snell’s pronunciation, whereupon she would flash her radiant smile, graciously. But we (my friend and I) were not too young to wonder at her beauty. Something I am sure the girls in our class admired or envied secretly. Much later I learnt that she was married, but then we called all our teachers (except nuns, surprisingly) MISS!

Singing was then an essential part of the curriculum for children. We would have an hour or more of singing every day. The nuns would sit at the piano, play wonderful tunes (some like There was a little Princess, a Princess, a Princess……… still echo in my memories of that time) and teach us to sing and sing with such unflinching devotion. The school had a whole row of rooms with pianos and many girls would take piano lessons before and after school. There were ‘feasts’ of one or the other saint often and we would sing and then get chocolates or candy and gifts for Christmas (more singing) before the school closed for winter.

When I did finally land in a boy’s school, I learnt the hard way how bloody rough and rowdy boys could be. The bullies would watch pictures (as movies were then called) and pretend to be like the hero for a whole week or till they saw the next picture. I also figured out slowly how being ‘big’ was so important for boys and being ‘beautiful’ so important for girls.