Srinagar: Curfew was imposed Friday in all major towns of the Kashmir Valley, including this summer capital, to prevent violent protests in view of the volatile situation following the death of a youth in police firing earlier this week. 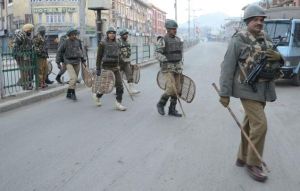 Curfew would remain in force in the entire Srinagar city and all major towns, including Baramulla, Sopore, Bandipora, Awantipora and Kakapora, said a police statement broadcast on the local radio station here.

A senior police official said curfew had been imposed in view of the violent protests in the region since March 5, following the death of a 24-year-old youth in a firing incident in north Kashmir’s Baramulla town.

Nearly a dozen people were injured in clashes between stone pelting mobs and security forces across the Kashmir Valley Thursday.

Despite curfew restrictions Thursday, hundreds of people participated in a protest march in Baramulla’s old town. Police had to use force to disperse unruly mobs in other parts of the valley.