Shimla: With Valentine’s Day only a day away, the floriculture business in Himachal Pradesh is blooming. Trade representatives in the state say the demand for roses and carnations has spiralled by over 50 percent in most north Indian cities. 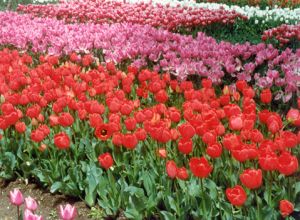 “The demand for roses, carnations and tulips from the state is quite good round the year. But just ahead of Valentine’s Day, there is a sharp spike in demand for cut-flowers,” said Vinay Bali, a farmer in Rajgarh in Sirmaur district.

Valentine’s Day, on Thursday, is the day to say it with flowers for lovers all over. It’s also the day that spells big business for florists and farmers.

According to Bali, most farmers have dispatched flowers to Chandigarh and Delhi, the main flower markets.

Farmers in the hill state are growing commercial varieties of marigold, carnation, tulip, lilium, gladiolus, chrysanthemum and rose. Approximately 860 hectares of land is under flower cultivation and over 3,000 farmers are involved in it.

Many pockets in Solan, Shimla, Sirmaur, Mandi, Kullu, Bilaspur and Chamba districts have made a name for themselves in the flower business.

Rajgarh and the Tissa block of Churah Valley in Chamba district are prominent floriculture hubs.

S.R. Sharma, assistant floriculturist at the horticulture department in Shimla, told that against the normal rates of Rs.4 to Rs.5 per stem, the best red roses have been selling at around Rs.10 a stem these days.

Demand for roses is also good in big cities, especially during Valentine’s Day. “We have been advising farmers to prune the roses in such a way that they start giving the first flush of blooms near the festive season,” Sharma added.

Demand for carnations too has multiplied by over 25 percent as Valentine’s Day draws closer, said O.P. Sharma, a floriculturist from Tissa.

“Exotic carnation varieties grown in our area command much demand. I have just sent 5,000 carnation buds to Chandigarh and Delhi,” said Sharma, who also heads the Churah Valley Cooperative Society.

A bud of carnation is being sold at between Rs.10 and Rs.12 in the wholesale market. On normal days, it’s sold for Rs.5.

The society, comprising over 470 small and marginal farmers, has made its name in growing high-variety exotic carnations, lilies, tulips, gladiolus and orchids, and vegetables in greenhouses.

Besides importing planting material from Holland, it handles the marketing of the entire produce from the Churah Valley in the open market.

To promote floriculture in the state, the horticulture department provides subsidies for using modern technologies like greenhouses and technical know-how.

A study by industry body Assocham says India’s floriculture industry is likely to cross the Rs.8,000-crore mark by 2015.

It says India’s floriculture industry, with just 0.61 percent share in the global market, is likely to reach 0.89 percent by 2015.