Delhi: Defending the special category status accorded to Himachal Pradesh, irrigation and public health (IPH) minister Vidya Stokes put the onus of funding the national rural drinking water programme on a 90:10 centre; state ratio basis like it was being done for other similar states. 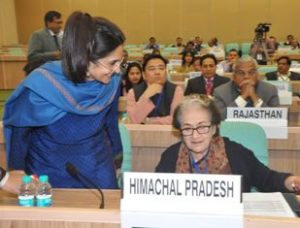 Speaking at the national consultation with states meet at Vigyan Bhavan here in the capital, the minister pointed out that though the hill state should be handed funding for the national program in accordance with the stated policy but it was only being allocated on a 50:50 basis.

She said that 8411 water supply schemes were providing potable water to a population over six million and most of them were based on local sources. The local sources were prone to the adverse effects of climate change that often resulted in slippages and often necessitated source level augmentation.

Of a total of 53,201 habitations the state had provided for safe drinking water to 42,476 habitations till March 2012. The target for the current year was to cover additional 2530 habitations and all habitations by March, 2017, she said.

Stress was being laid on sustainable measures and rain water harvesting structures had been made mandatory for all public and institutional building. Hotels and industrial units too had been asked to create water harvesting systems.