Very rarely Bollywood has fashioned con-theme based movies that establish a distinctive rapport with the viewers. Here is a carefully crafted screenplay that guarantees successful foray of Bollywood into the filch-world.

It is a story of a conman Akshay Kumar (Ajay Singh) who after his failure to qualify for CBI’s recruitment exam builds a gang with three other accomplices amid a grudge in heart. The gang loots money (unaccounted cash) from politicians, bureaucrats and businessmen with a foremost motive of making wealth.

An adaptation of real life incidents in 1987 when a series of con-robberies were witnessed in parts of Delhi, Mumbai and Kolkata by fake CBI and income tax officials.

However, this group is based on ethical values. They plan to end their burglary trail with the concluding (50th) and biggest heist-robbery of their lifetime. 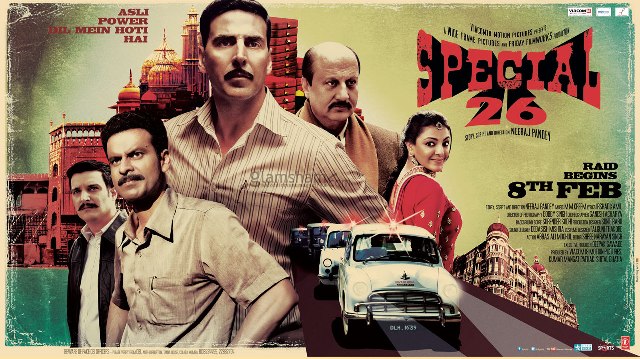 This is how a perfect entertaining thriller unfolds with the entry of straightforward but over-confident CBI officer Manoj Vajpayee (Wasim Khan) who devices a trap to grab the thieves.

Neeraj Pandey’s directorial debut “A Wednesday” was a treat for thriller movie buffs but “Special 26” is a step-ahead; a perfect unison of thrill with humor. His screen play is consummate.Neeraj’s films always symbolize resentment of “common man” towards the corrupt political system and how he could held system to ransom if determines as portrayed by Nasserudun Shah in Pandey’s last release.

Akshay has performed with a restrain. His last appearance as a conman was in Farah Khan’s box office blooper “Tees mar Khan”.

Anupam Kher (A.K Singh) is sparkling. His subtle “middle class” comic tap on the role fills the air with humor recurrently. A no-nonsense cop of “A Wednesday” plays a role of bogus CBI officer with utmost ease that reminds of his character in “C-Company”.

Kajal Aggarwal (Priya) doesn’t have anything considerable to perform as with actresses in most of Akhsay’s movies.

Rajesh Sharma and Kishore Kadam played their part flawlessly as other two accomplices.

Jimmy Shergill plays second fiddle as been a tradition for him and Divya Dutta went completely wasted in an insignificant role.Neeru Bajwa, the latest heart throb in Punjabi film industry was roped in for forgettable item number.

The particular scene during sham CBI recruitment exam where a candidate constantly answers in broken English — “I want to do my country” propels smiles among audience. Although, it’s complete adaptation of a scene from “Rang de Basanti”.

The research work by Pandey and his team before the movie was exemplary. The era of late 1980’s was re-created with the use of Padmini Fiats, Maruti 800s, Contessa cars, and white Lambretta scooter of Manoj Vajpayee.

Nonetheless there are some loopholes (not many) very difficult to take into stride.

The recruitment drive through open-interview by the fake CBI team seems too overdone.

It is difficult to understand how an experienced CBI official, Manoj Vajpayee trusts Jimmy Shergill so easily only to be fooled later.

Music by MM Kareem and Hiemsh Reshamiya is just reasonable and songs looked forcefully incorporated as with most of the movies now days. Background score by Sanjoy Chowdhry was incredible.

A sequel is surely on the way.

Special 26 is a must watch especially for the ones turned off by Akhsay’s recent releases.