Shimla: After rumours swirled that the Congress government in Himachal Pradesh would appoint a “working” chief minister as 78-year-old incumbent Virabhadra Singh would go abroad for treatment, many ministers asserted that no such thing was planned. 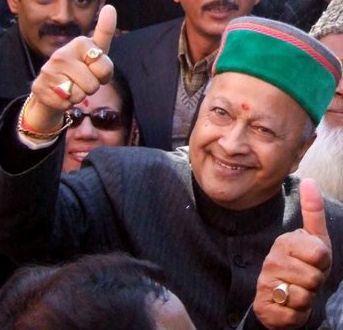 Seven of the nine ministers in the state said “some vested interests” were circulating baseless rumours, and dismissed reports that appeared in the press claiming that Virbhadra Singh would be heading abroad for treatment.

Chief Minister Virbhadra Singh is known here popularly as “Raja Saab”. He is the scion of the erstwhile princely state of Rampur-Bushahr in Himachal Pradesh.

“There is no move to appoint a working chief minister. There is not an iota of truth in these reports appearing in the media,” the ministers said, in a statement released Wednesday.

“The Congress government has just taken over and reports that Chief Minister Virbhadra Singh will be going abroad for treatment are not only false but also mischievous and an attempt to create confusion in the minds of the people,” the ministers said.

Two of Virbhadra Singh’s cabinet colleagues, however, have remained tight-lipped on the matter. Health Minister Kaul Singh and Transport Minister G.S. Bali made themselves conspicuous by not being part of the statement issued by their colleagues.

The seven ministers said the chief minister has been in good health, and has been working for about 16 hours a day.

“The government is strong and stable and functioning efficiently. In a short period of one-and-a-half months, it has initiated many pro-people programmes,” the ministers said.

Sources said the rumours may have spread because Virbhadra Singh has been away from the state for a good part of the time he has spent as chief minister, since assuming office Dec 25, 2012.

Officials however said that the chief minister has been busy lobbying for the state in Delhi. He has been going from one union ministry to another, attempting to bring central projects to the state, to improve infrastructure and connectivity in the Himalayan state, officials said.

“The chief minister has categorically told ministers and officials to lobby hard to get sufficient funding for new central projects and push for speedy implementation of projects that have been caught in unnecessary logjams due to the stubborn attitude of the previous (state BJP) government,” an official told, requesting anonymity.

The source added that the chief minister was lobbying for liberal central funding of projects being implemented with aid from the union government, in the ratio of 90:10, just like some special category northeastern states.

Last week, he called on Prime Minister Manmohan Singh and sought a special assistance package of Rs.7,565 crore and resumption of a special industrial package that expired March 2010.

Chief Parliamentary Secretary Rajesh Dharmani, who met Union Minister of State for Home R.P.N. Singh in Delhi this week for extending health services to retired paramilitary personnel too on the pattern of ex-servicemen of the armed forces, told that the chief minister has personally taken up the issue of delayed projects with the railway ministry.

Ahead of the Rail Budget, he said the chief minister has not only advocated for timely completion of the Bhanupalli-Bilaspur-Beri rail line project and but also pressed that its funding be in the ratio 75:25.

Likewise, the conversion of the Pathankot-Jogindernagar narrow gauge rail line into broad gauge and its expansion up to Leh in Jammu and Kashmir is also on the chief minister’s list of priorities, sources said.