Shimla: Holding the previous government responsible for snooping on political adversaries and civil society, chief minister termed the Dhumal government a Gestapo regime that had subverted democracy by tapping about 1000 phone numbers and even going to the extent of bugging his rooms.

At the outset of his first press conference after becoming chief minister, Virbhadra said former chief minister Prem Kumar Dhumal could not escape responsibility for eavesdropping on phones of others, which included members of civil society.

“After all, the chief minister was also home minister incharge for the activity carried out under his stewardship,” he said.

He added that the forensic report about phone tapping had thrown up that the previous government was tapping about 1000 numbers and the home department is being asked to verify which numbers were being snooped upon illegally. 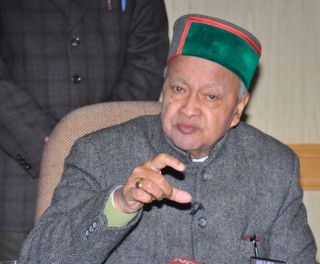 Even my number was being tapped and what’s more, said Virbhadra, the room where I would stay at in Chandigarh Himachal Bhavan was bugged. An enquiry has been ordered.

The police was functioning like Gestapo, the German Secret Service and it amount to subversion of democracy. Culpability of anybody found in this illegal act, would be dealt with in accordance with law and it would not matter whosoever the person may be, he said.

A day after the Congress government was sworn in on December 25, chief secretary Sudripta Roy on receiving a tip-off that CID officers were destroying computers records that were used to store tapped phone data had raided the place and seized the machines.

The government had asked forensic experts to retrieve the computer data and the chief minister made the disclosure on Monday after going through the enquiry report.

Speaking about other issues, the chief minister said that states finances were in shambles. The earlier government had spent like there was no ‘morrow, he said.

Hold the previous government responsible for being unable to protect the industrial package for its allotted 10 year period, Virbhadra said that we have asked for restoring income tax and excise incentives to encourage setting up of industries in the hill state.

The state has also made a strong case for expansion of rail network that has been neglected for long. He said that a demand for connecting Baddi with Kalka-Shimla rail track, completion of Nangal-Talwara line, extending the proposed Bhanupali-Bilaspur rail track to Mandi and connecting the Pathankot- Jogindernager line to Mandi after converting it to broad gauge has been made.

He said the state government would look into the issue pointed out by railway ministry that land acquisition for the Bhanupali-Bilaspur track was moving at a slow pace.