Allahabad (IANS) The world’s largest gathering of people, the 55-day Kumbh congregation, began in this north India town today with tens of thousands of devotees, led by ash-smeared Naga ascetics, taking a dip at the Sangam – the confluence of the Ganga, Yamuna and Saraswati rivers.

Held in this Uttar Pradesh town after every 12 years, the first day of the Maha Kumbh is likely to see more than 50 lakh people taking a holy dip on the occasion of Makar Sankranti, senior official B.P. Singh told. 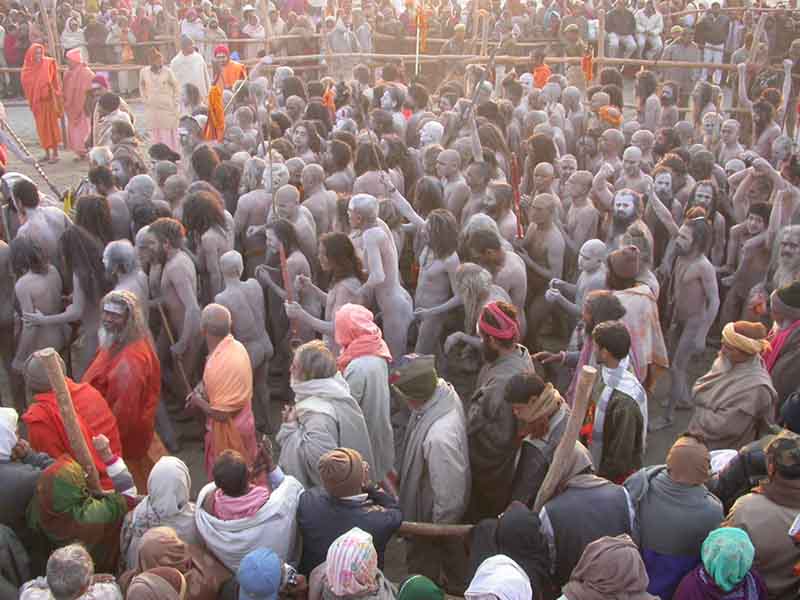 Elaborate arrangements were made on the VIP ghat, where the 13 sects of sadhus lead bathers in a mutually agreed sequence.

The fraternity was led by Maha Nirvani Akhada and was followed by Niranjani, Anand, Juna and Bairagi akahadas, among others.

As the clock struck five Monday morning, heavily decked-up chariots, some in silver and gold, wound their way to the Sangam, with hundreds following in procession on foot, beating drums and blowing conch shells.

There was a mad frenzy in the foreign and national media, with photographers rushing to get winner shots of the naked, ash-smeared ‘Naga’ sadhus jumping into the chilly waters of the Ganges. Before they did so, the sadhus danced and threw garlands at the press gallery in gay abandon, waving to hundreds of followers on the other side.

Carrying silver tridents, maces, axes and swords, some of the sadhus with flowing beards told IANS that they felt on top of the world as they “touched mother Ganges”.

“This is an electrifying moment,” said a visibly elated 75-year-old Mokshanand from Vrindavan, who said he this was his seventh Kumbh in a row.

Several rows of sand bags have been piled up on the three-km ‘bathing stretch’, said Mani Prasad Misra, the ‘mela adhikari’, in-charge of Kumbh 2013.

Misra told IANS that arrangements had been made to ensure that the Ganges flowed “well and clean” during the major bathing days. A special team of 10,000 sweepers have been pressed into service to keep the area clean.

Policemen from Uttar Pradesh and neighbouring Uttarakhand were on vigil. Many policemen were seen blowing whistles to keep crowds in order, while some were spotted showing lost devotees the way.

At daybreak, many thousands had already taken a holy dip. Many more were pouring in from all corners of the premises, spread across 193.5 hectares.

While some thought of the large crowd as a “spiritual mayhem”, there were those who bit their nails as they watched Naga sadhus into the water.

For the hundreds who have not been able to reach the bathing sites, 13 huge LED screens, both mobile and stationary, were playing the recording of the bathing sessions.

An army of mediapersons is covering the event. Over 100 foreign journalists and more than 500 local and national journalists are present here. Special arrangements have been made for the coverage, likely to be beamed across the globe.

Emerging from the cold waters of the Sangam, Indu Rani, a 70-year-old widow from Punjab, said she had arrived here on instructions from her guru who stays in Vrindavan.

“I cannot explain the feeling when one takes a dip in the Ganga Maiyya (mother),” an elated Indu said.

Chavi Sharma, working with an IT consultancy firm in Kolkata, confessed that she was “amazed to see such a mammoth gathering”.

“I had heard of it, but to actually be part of something so momentous feels so cool,” she said.