Shimla : Home grown premium brand launched Kingfisher Ultra, a high end beer, in Himachal on today, hoping to capture about 10 percent of the market share in a calendar year. 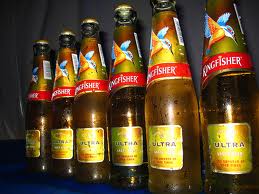 Speaking at the launch, Gurpreet Singh, vice president marketing United Breweries, the company that owns the brand said, “before summer the premium beer would also be launched in the townships of Manali, Dharamshala and Hamirpur.

Holding imported Carlsberg beer as the direct competitor to the premium home grown brand, he said that to maintain the quality of the Kingfisher Ultra was being brewed at a single facility in Mumbai from where it was being ferried to other parts of the country.

Though the brand was launched in Bangalore in 2009, Singh said that travelling up north to Himachal may have taken sometime but it was targeted at the upwardly mobile younger beer drinking clients and the high end tourists visiting the hill state.

The company already has Kingfisher Blue beer in the market that is a grade lower than the Ultra brand.

Singh said that the Ultra brand has been supporting Fashion Week in most cities like Mumbai, Delhi, Bangalore, Chennai and Chandigarh and by summer time would also try to collaborate with event organizers to have one such in Shimla also.

Though the brand is already available in Chandigarh, the company senior executive said that the premium brand would also be laundhed in Jammu & Kashmir, Punjab, Uttarakhand, Bihar, Jharkhand and other where it is not available soon.