New Delhi: The Indian economy suffered its worst slowdown in almost a decade, with the country even facing the ignominy of a ratings downgrade, which was salvaged somewhat with some hasty but big-ticket reforms in the latter part of the year.

A downgrade of India’s sovereign rating, already a tad above unstable, would have dealt a further major blow to the economy by assigning junk status to the country’s external borrowings. 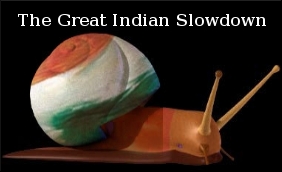 This would have forced multinational corporations to freeze their capital flows, making foreign funds to withdraw from the country’s capital markets and depreciating the rupee to a level that could have sent fuel prices to untenable levels.

The perception of policy paralysis was sought to be changed with the federal government pursuing a series of reforms, notably on the initial steps to allow global chains like Wal-Mart, Carrefour, Tesco and JC Penny to set up shop in the country. It is now up to individual state governments to follow suit — though 13 out of 28 have said no.

The average economic growth of 5.36 percent in the first three quarters of 2012 is sharply lower than the average annual growth of 8.2 percent recorded in the past eight years.

“India’s growth is affected by a combination of global and domestic factors,” said Anis Chakravarty, director, Deloitte Haskins and Sells. “Muted growth in the global economy, especially in Europe and North America, also affected India. There are a lot of domestic issues also,” Chakravarty told.

Chakravarty said high cost of capital, poor infrastructure and policy inaction for a fair part of the year severely affected the performance of different sectors of the economy. But the reform process later will help accelerate growth.

Since September, Prime Minister Manmohan Singh’s government has announced a series of reforms — spending cuts, liberalisation of foreign investment policy norms and easing corporate rules. Analysts term these as the biggest reforms overhaul in a decade.

In a bid to cut spending on petroleum subsidies, the government announced the steepest ever hike in diesel prices and put a cap on the supply of subsidised cooking gas for domestic use at six cylinders per annum.

Foreign investment policies for the sectors like retail, banking, broadcasting and aviation were liberalised to attract more overseas funds. The multi-brand retail sector was also opened despite huge political opposition.

In the mid-year economic analysis, the government expects that the economy would grow by 5.7 percent in the fiscal year 2012-13. In the first half of the fiscal GDP has expanded by 5.4 percent. The economy needs to grow by over six percent now for the fiscal to achieve the 5.7 percent overall growth.

Industrial output growth numbers for October gave an indication of a revival. After a decline during the most part of the year, the factory output measured in terms of the Index of Industrial Production (IIP), grew 8.2 percent in October, the best performance in 16 months, according to the latest available data.

Finance Minister Palaniappan Chidambaram has termed the October factory output data very encouraging, saying it was an indication of the “green shoots” in the economy. Yet, high inflation and widening fiscal deficit continued to remain a big concern for the economic policymakers.

Due to persistent inflationary pressure, the Reserve Bank of India (RBI) in its Dec 18 policy review decided not to ease monetary policy despite pressures from some sections of the government and industry bodies.

As per the latest official data, the core inflation based on wholesale price index was at 7.24 percent in November against 7.45 percent in the previous month. Despite this, inflation remains much above the central bank’s comfort level of 4-5 percent.

“Inflation still remains high for comfort. Easing of supply side restrictions and policy are imperative to bring this down. The wide current account deficit is also a constraint on monetary policy easing,” said Naina Lal Kidwai, president of the Federation of Indian Chambers of Commerce and Industry (FICCI).

“There is some scope for monetary policy easing next year, assuming that inflation risks recede and that there is sufficient progress on fiscal consolidation and structural reforms,” said Kidwai, a banker, who heads HSBC’s operations in India.

Finance Minister Chidambaram also announced a five-year road map to correct the government’s fiscal position, setting a target to nearly halve the deficit to three percent. The target also is to contain the deficit to 5.3 percent in the current financial year as compared to 5.8 percent in the previous year.

Looking ahead, experts feel the government’s resolve to cut deficit and further action on reforms, like getting parliament to approve the legislative action required to open up insurance, pension and banking sectors further, combined with the promised cut in interest rates early next year, should clear the path again for accelerating growth.

Highlights of India’s economy in 2012:

* GDP grew by 5.3 percent, 5.5 percent and 5.3 percent respectively in the first three quarters of the calendar year.

* This is the slowest pace of growth in almost a decade.

* Economic growth target of 7.6 percent was set up in the union budget presented in March.

* Inflation remained a concern. It was recorded at 7.24 percent in November.

* Government targets to contain fiscal deficit at 5.3 percent of GDP.

* Foreign equity of up to 51 percent approved in multi-brand retail trade. Up to states now to follow suit.