New Delhi: The poaching of wild animals, birds and reptiles for meat continues unabated in the country, say wildlife experts, and one way to stop the illegal hunting is community awareness, especially among tribal communities.

“The bushmeat trade is widespread in India although no comprehensive study has been carried out. No state is free from it,” Jose Louies, Wildlife Trust of India’s regional head, said in an interview. 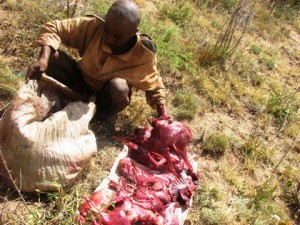 A part of the illegal trade in bushmeat, also known as wild meat, was exposed last week when news channels flashed shocking images of thousands of migratory birds being slaughtered in Nagaland.

The small raptors called amur falcons, flying from Siberia to east Africa, were caught while they were passing over Nagaland’s Wokha district.

There are many kinds of bushmeat hunters in India, said Louies.

One are tribesmen, who live inside or on the fringes of forested areas and do subsistence hunting with primitive weapons, he said.

Others hunt wild animals to sell their meat as a delicacy in cities or for sport, although hunting has been banned in the country under the Wildlife Protection Act, 1972.

“For tribesmen, the meat is a rich source of protein. For hunters, it is a means of making quick money in villages or town markets. And for the rich and the famous, it is about the thrill of the chase; something to show that they are macho,” he said.

According to Louies, cost does not matter in the bushmeat trade. “It is all about removing an important part of the ecosystem,” he said, citing the killing of deer species that would in turn affect predators like tigers.

The species targeted for meat include sambar, chital and blackbuck, he said. “Their meat tastes like mutton.”

But there is no specific target while hunting birds for meat, said Rita Banerji, a filmmaker who made the documentary “The Wild Meat Trail” on the impact of hunting on the wildlife in the northeastern region.

“While we were filming, we saw all kinds of birds — from hornbills to sunbirds and barbets — being hunted,” she said.

But there is a major difference between bushmeat trade in the northeast and the rest of the country, she said.

“In the northeast, most of the forests are community controlled. In the rest of India, forests are under government control.”

And to curb the bushmeat trade in the northeast, where tradition dictates hunting, we need community participation, she said.

“To make tribal communities move away from hunting, it has to work at both levels: working closely with them to ensure their livelihood needs and treasure what they have. And at another level to strengthen the enforcement of laws where wildlife is concerned, specially where trade and poaching is concerned,” said Banerji.

Louies agreed. “A key part of the Indian bushmeat story is the fight against tradition. Awareness is the key. Local, simpler solutions where the community is involved should be preferred above complex, urban ones.”

“If we do not look at all these aspects, there will be tragic episodes like the amur falcon massacre,” Banerji said.