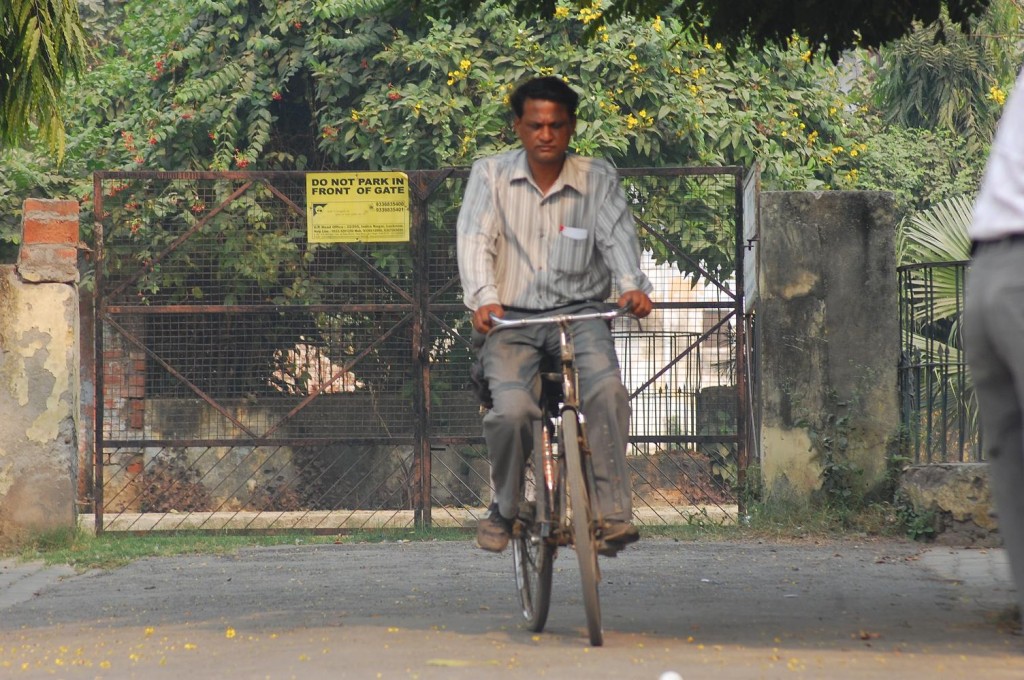 But the similarities end there.

For 42-year-old Aditya Kumar, currently engaged in a battle just “to live”, there were no sparklers for Diwali this year. His passion to educate slum-dwelling kids has taken a beating, and his resolve is tested anew each day.

Having started his ‘Seekho English’ classes on a bicycle in 1995 from Kanpur, he says he has now “lost it”. Though he now has many keen students from the shanties, he has exhausted all his resources, and can scarcely “even eat two square meals” himself.

Hailing from Salempur village of Kayamganj area in Farrukhabad, Kumar left his village of 400 residents in 1992 and came to Kanpur. His motive? He wanted to “get the fear of English” out of his system.

Kumar said that while he began his BSc studies, he feared the “angrezi” (English) in which he was expected to be conversant. The fear always chased him; so much so that he decided to take it “head on”.

“I decided to do something about it, I decided I would not only overcome the fear of English myself but also teach English to slum-dwelling kids,” he says.

By 1995, he was the owner of a second-hand bicycle. He had learnt to “read and write good English”. Soon, he started an “English-speaking school”, which would run mostly on his bicycle.

“Where ever I got students, I would sit and teach — by the roadside, in parks, near slums. I had a board on the cycle, and students would just read it and stop me. I was one of them, I understood what it meant to be poor and without support,” Aditya says, with a grim expression.

Aspiring to be a bureaucrat and join the Indian Administrative Service or the Provincial Civil Services, he settled for taking tuitions, for a fee of Rs.300 per month in Kanpur. “Zinda rahna bhi zaroori tha,” (Just staying alive is important), he says.

Since then, he has come a long way, he reminisces with a wry smile.

Having pedalled in Kanpur and then in Lucknow for a lakh kilometres or more by now, he says he has faced rough times. He has been the target of violence, and people have been suspicious and beaten him up for sitting with a bunch of boys and girls along roadsides.

“They would beat me, shoo me away. Then I put up a small board on the cycle, announcing – ‘Aditya Master Saheb’. Things have improved, and on and off there are even people who tip me with Rs.100 or so for food and tea.”

Living in a room that is just five feet square at Nishatganj that was offered to him by a compassionate man, Aditya remarks on life’s ironies: When he first began, he had no students. These days, he has no dearth of students as girls, especially, flock to him to pick up English in the hope of finding work at call centres and as receptionists. But he has no means of sustaining a livelihood.

“How do I live, there is no money for food, I just have two pairs of clothes and I cannot go begging,” he says, pointing to how the state government spends crores of rupees on education, but cannot offer him support, despite his unrelenting campaign to educate poor kids from slums.

Having made several futile attempts to meet Chief Minister Akhilesh Yadav and his officials, Kumar says he is now fed up of standing in long, serpentine queues.

“I am ageing now, how long can one fight this battle? I am getting tired now,” he says, with a sigh full of hopelessness.

But what does he teach?

“I only groom the students for admission to school, I take care that they can write their own name and read and write a little. I cannot do much more,” said Kumar.

Over the last twenty years, he has taught at least one lakh students, he says.

And would the 42-year-old not want to find a wife?

“When I cannot be sure of feeding myself, how can I take on a wife,” he says, in a matter-of-fact tone.

For now, he says he does not know what the future holds, he says he feels “mentally disturbed”.

What might happen to him, to his passion for teaching, he cannot say.

“I will take a call after Diwali on what to do about the whole thing,” he says.