New Delhi: Despite the “hype” around the tiger and the gharial in India, the future looks bleak for both the animals, says Romulus Whitaker, seen as a father figure for herpetologists in the country.

“There are two animals in this country around which the media has built plenty of hype. These are the tiger and the gharial. Despite the hype, the future looks slim for both,” said the reputed conservationist. 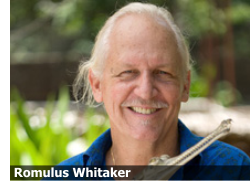 Whitaker, 65, is the founder of the Madras Snake Park, India’s first snake park, the Andaman and Nicobar Environment Trust and the Madras Crocodile Bank Trust. He was in here for the launch of “My Husband and Other Animals”, a book written by his wife Janaki Lenin.

Since 2010, Whitaker has been part of a National Tri-State Chambal Sanctuary Management and Coordination Committee for gharial conservation. What has been his experience?

“It is a huge task. This sanctuary is a linear one, straddling borders of three states. We have many challenges. One is getting everybody in the team to think on the same lines. Getting the local residents to be on the side of wildlife is most difficult.

“Next, we have to see to it that sand from the Chambal is not overused, especially in its nearest market, the NCR (National Capital Region). Authorities in the NCR also want to use the river’s water. As a result of all this, the depth of the Chambal is constantly going down,” he said.

“We are arguing for animals like the gharial, the river dolphin, fish and water birds. In the long run, we have to save the river. And the survival of these animals will tell us about the river’s health,” he said.

Whitaker – an American by birth who lived most of his life in India – said the country should adopt “the Australian Model” for mitigating human-crocodile conflict.

“Crocodiles have made a comeback. They were on the way out in the 1970s when I started as a herpetologist. And while that is good for fisheries and national reservoirs, people would not like the idea of large crocodiles in their midst.

“It is the same as in the case of venomous snakes. People have to be told that they can live with crocodiles if they just take a few precautions. We can take inspiration from Australia where a whole system is in place to reduce encounters between humans and saltwater crocodiles. We only have to localise that system. Awareness is the key,” Whitaker said.

Having featured in documentaries, what is his take on the animal handlers shown on wildlife channels?

“The trend in television is to have violence, excitement and humour just to keep ratings high,” he said.

Last week, a bear was almost burnt to death by a mob in Kashmir. Are we becoming more intolerant to wildlife?

“The response of the people is troubling. But one must also realise and empathise with people caught in such a situation. When you encounter a wild animal and it is your and your family members’ safety that is at risk, this kind of reaction is natural.

“I feel neither party is to blame. It is just sheer circumstance that brings about such encounters and their tragic results,” Whitaker said.

Whitaker now plans to work on the issue of snake bites. “I want to wake up the health department, raise awareness and improve the situation.”