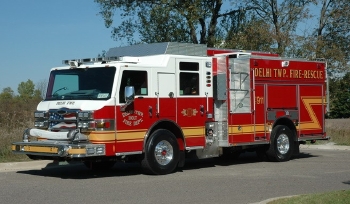 New Delhi: Drawing little attention to them and skipping Diwali festivities, the 1,700-odd firemen of Delhi Fire Service (DFS) worked through the night Tuesday to put out nearly 250 accidental fires in the city affording Delhiites a safe and secure festival of lights.

As the city exploded to the sound of bursting crackers and rockets zooming into the sky, the fire fighters remained alert to ensure that the 12 million-plus Delhiites had a safe Diwali.

With exigencies of duty keeping them far from their families and celebrating the festival of lights, the firemen busied themselves attending to calls reporting fires from stray crackers or rockets. The Delhi Fire Service (DFS) control room at Connaught Place remained maddeningly busy during the festivities.

“Though we are short of manpower, we are geared to avert any fire turning into a major inferno,” said a fire fighter manning the control room, who spent the night of Tuesday-Wednesday at the DFS headquarters. The control room had 12 firemen, with two of them deputed to attend calls and direct fire tenders to locations from where fire incidents were reported.

The calls peaked between 8 p.m. and 11 p.m., when most Delhiites were bursting crackers. There were 120 calls during these three hours alone. A total of 250 calls were reported during Monday/Tuesday night up to 7 a.m. Wednesday. There was a buzz in the DFS control room when a call reporting a fire came from Bhogal in south Delhi. But even as the firemen prepared to move out, another call came saying the fire had been doused. Thanks to more awareness this year, no major fire was reported in the city.

A maximum of four fire tenders were dispatched to a few factories to douse minor fires. To control fires in narrow lanes and congested areas, the fire fighters were equipped with a small vehicle to pump water, and a control-cum-light end van with high water pressure besides a three-man quick reaction team.

Ninety per cent of the calls were related to fire crackers. Three people, including two women, were injured in fire accidents in the city. “The number of calls will decrease now, as people stop bursting crackers,”

Mehak Singh, assistant control room in-charge, told this correspondent at 1 a.m. Wednesday. Delhi is divided into six divisions by DFS with 55 fire stations and 200 fire tenders. “All the fire stations remain on alert through a 31-hour period during Diwali. We keep directing fire stations to send their tenders in response to fire alarms based on the location of the fire,” Singh said, explaining how the DFS dealt with emergency calls. “Our response is critical. We have an average response time of a minute during the day and two minutes during the night,” an official said. ”

Even a small flame could turn into an inferno within no time,” Divisional Fire Officer Rajesh Pawar at the DFS headquarters said. DFS had strategically placed its fire tenders at 14 key spots — including Tilak Nagar, Lajpat Nagar, South Extension, Alipur and Kanjhawala — in the national capital to ensure speedy response to a fire alarm.

“The calls from East Delhi were the least this year compared to previous years. Most calls this year came from south and west Delhi,” Manoj Sharma, the control room in-charge during the morning shift, said. Factories, residential buildings, vehicles and garbage heaps were among those that caught fire from crackers this year. “We faced hurdles in congested areas, narrow alleys and slums, where getting close to a fire spot is difficult, especially in central Delhi. This time, we used motorcycle-riding teams carrying fire-fighting equipment in back-packs to reach these spots, particularly 10 places including Turkman Gate, Pahar Ganj and Gandhi Nagar,” Sharma said.

As dawn broke out in a smoggy Delhi sky Wednesday, the fire fighters heaved a sigh of relief. There had been no major fire and no loss of life. As the city slept after a night of noise and merry making, the firemen went home to their waiting families. For them, duty came before Diwali.