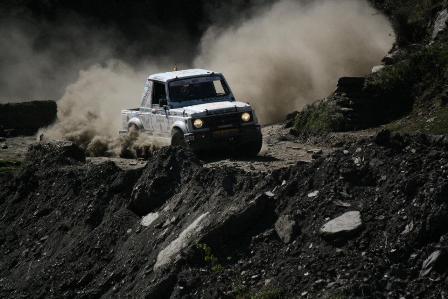 Manali: The 14th edition of the Maruti Suzuki Raid-de-Himalaya, one of the world’s toughest motor rallies, lacks preparedness to handle disasters. It is not equipped to clear an accident site expeditiously, rallyists said today.

The Himalayan Motorsport Association, the Shimla-based club which has organized the rally since its inception, however, denies the allegations and claims that it provides a world-class safety apparatus and is equipped to airlift victims in case of an accident.

“The rally lacks even basic safety requirements like first aid boxes. Moreover, the distance between one stationed ambulance and another is too much, and it’s not possible to reach the site of the accident in the shortest possible time,” a participant said today.

The ‘Raid’ was flagged off from Shimla Sunday, and reached the tourist resort of Manali in the evening.

A participant said Rajeev Khanna, 57, a grandson of Oberoi Group founder M.S. Oberoi, was injured in the first leg of the rally.

“Khanna was helped by passers-by when he met with an accident, nobody from the organizers came to rescue him,” a rallyist said, adding that it was passers-by who took the man to a nearby hospital.

Khanna, who is well known among rallyists, is the oldest participant in the X-treme two-wheel category. He was driving a Yamaha WR 450.

“The first incident highlighted shortcomings of the organizers. On the one hand, they boast of hiring a helicopter to rescue rallyists; on the other hand, they don’t have even first aid kits,” said the rallyist, who did not want to be identified.

The organizers of the event, however, said that they had come to the rescue of the well-known rallyist in the shortest rescue time.

“Almost at the close of the rally route for Day One, his mobike hit a railing causing severe hand injury. Following this, he was immediately rushed to Kullu, from where he was airlifted to Chandigarh,” said a statement quoting the organizers.

The statement said that the helicopter evacuation service was introduced for the first time in the ‘Raid’. Six ambulances have been stationed along the route.

Motorsport enthusiasts have been expressing concern over the safety of rallyists since two motorists taking part in the Mughal Rally, another annual event organized by the Himalayan Motorsport Association, lost their lives in July this year because they couldn’t be rescued in time.

Motorists claimed that rescue vehicles and hydraulic cutters for extricating accident victims trapped inside a crashed vehicle are missing from the ‘Raid’.

“Clearing the accident site is not as per international norms. They are taking too much time, hampering the attention of other drivers,” a motorist said.

From this town, the rally will travel through Kaza, Hikkim, Keylong, Sarchu and Pang, before culminating at Leh in Jammu and Kashmir Oct 12.

The Raid-de-Himalaya is the only Asian motor sport event listed in the off-road rallies calendar of the Switzerland-based FIM (Federation Internationale Motorcyclisme), which captures the attention of the international rallying circuit.