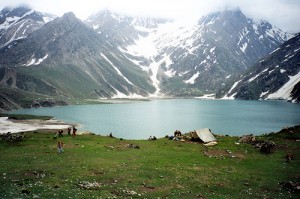 “I will keep two helicopters of the State at your (Syed Ali Shah Geelani) disposal to fly over Pahalgam-Amarnath track. You select any photographer of your own choice and have a complete aerial view of the mountains and the track and show us where macadam is being laid even over a meter of the track,”

Accusing Geelani of distorting facts and issuing calendars without any base, Omar said, “A separatist leader is talking of agitation and issues calendar without looking into facts and ascertaining the truth. No road is being built from Pahalgam to Amarnath Cave. It is all false propaganda”

Citing the papers submitted by the State Government in the Supreme Court, Omar said that it vindicates the stand of state government that no construction is going on at pilgrimage site, “The papers submitted by the state government and the order of the apex court itself substantiates and vindicates the fact that no road is being constructed in the said area. Those indulging in this propaganda should go through 200 page document provided by the State Government to the Supreme Court in this regard and show us where there has been any talk of building a road,”

Referring to the militant attack on a hotel in outskirts of Srinagar on Friday, Omar said, “Such attempts are aimed at disturbing peace and tranquility in the State and make people fearful. They try to create fear in the minds of people by using mikes and a gun as peaceful situation does not suit to their style of politics.”