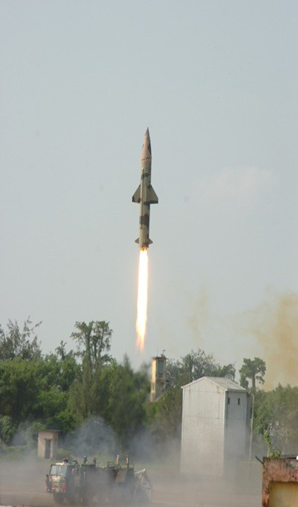 The 350-km range missile blasted off at about 9.10 a.m. from the launch complex No.III at the Integrated Test Range (ITR) of Chandipur-on-sea in Balasore district, around 230 km from here.

The launch was carried out by the Indian armed forces, as part of user trial, and monitored by the scientists of Defence Research and Development Organisation (DRDO).

All the radars and electro-optical systems along the coast have monitored the missile throughout its flight path.

It is one of the five missiles being developed under the country’s Integrated Guided Missile Development Programme.

The medium-range missile, with flight duration of 483 seconds and reaching a peak altitude of 43.5 km, has the capability to carry a 500-kg warhead.

Prithvi uses an advanced inertial guidance system with manoeuvring capabilities and comes within metres of its target.

The missile has been successfully flight tested in the past on a number of times as part of the training exercise.

India is now likely to test Dhanush missile, the naval version of Prithvi with the same range, from the same defence base Friday.