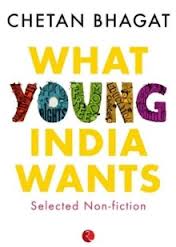 Come 2012, and Chetan Bhagat’s newest release, a series of selected essays previously published in newspapers as columns made their way to book stores across the country, titled, ‘What Young India Wants’. As per the author’s statement, the book is supposed to discuss issues that the youth of this nation is saddled with. Although the book by itself is better than most of the other books Bhagat churns out periodically, what is most irritating is the brashness with which Chetan Bhagat claims to be the so called ‘voice’ of the youth.

Sure, the man has written novels that have gained mass fan following in the Indian audience and given his work a cult-status of sorts. Some may even be of the opinion that Bhagat helped bring about a change we hadn’t seen until his first book, 5 Point Someone hit the stands: he got a huge number of Indians to read. Traditionally, the Indian way of life doesn’t necessarily encourage reading to be an important hobby or habit. Barring the educated section of the society, reading isn’t an activity that is deemed important and hence it isn’t encouraged and cultivated among children unlike in the West. Thus, when Chetan Bhagat swept in with his charming stories about characters the young Indians identified with, recognized and related to, they read his books. They read his books for the melodrama, the element of gritty reality, the Bollywood inspired love-angle. It’s as simple as that. 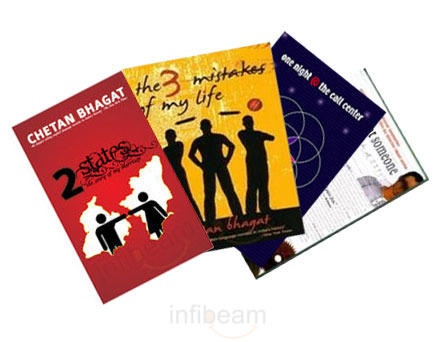 However, lest the flipside be ignored, Chetan Bhagat can also be held responsible for one more trend- the growth in the number of abysmally written novels. Chetan Bhagat may be a story-teller, but good writing has never been his forte. Anyone who’s read more than one of his books will agree with me when I say that any Chetan Bhagat book is marred with grammatical errors, poor punctuation and the mockery he makes of the English language definitely leaves a bitter aftertaste. After Chetan Bhagat established himself as an author, there mushroomed a number of other individuals who wrote similar stories, hoping to strike gold like Bhagat did. Before you knew it, the ‘Indian Writing’ section in most bookstores saw shelves lined with paperbacks that told stories by or about an IITian or IIM graduate. In order to cash in on that segment of the audience that was receptive to Bhagat’s work, a lot of bad manuscripts made it to published books. Bhagat had worked out the perfect formula for an entertaining read and soon everyone wanted a slice of the pie. ‘Anything for you Ma’am’, for example, is one of the books that perfectly fit the bill.

Over time, it is the commercialisation of the industry that has taken precedence over quality writing. We found an audience that accepted and relished a badly written novel simply because its story was fresh and then we took advantage of them. Suddenly, it became all about the idea. The writing became secondary. Snazzy cover pages and alluring descriptions became the norm. Everyone wanted to cash in on the segment of readers who craved stories they could relate to and soon we were left with a barrage of Indian authors, but only a few who could weave a story like it’s meant to be.

Today, I am filled with scepticism whenever I stand in the Indian Writing aisle at a bookstore because even though the story may catch my fancy, I shudder to think what the writing will be like. It is an unfortunate reality that although Chetan Bhagat got more Indians to read, the commercialised and profit driven industry that publishing has turned into, gave an impetus to a lot of rubbish that shouldn’t have ever seen the light of day. Instead of nurturing the reading habit of young India, publishers smothered it by feeding them more trash. And those readers who were glad to have a new host of writers to add to their prized bookshelf were left sorely disappointed in due course of time.

Here’s sincerely hoping that the coming few years see publishers printing books that have innovative stories, are flushed with creativity and respect the richness of the English language.