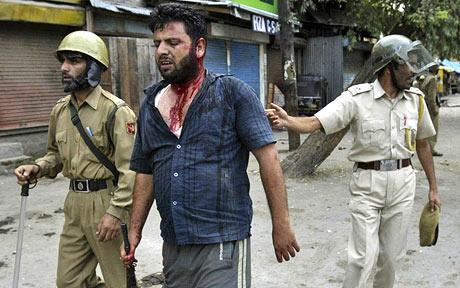 Srinagar: In typical Bollywood style, a group of young men in north Kashmir’s Baramulla town kidnapped a policeman after one of their associates was arrested by police on the charges of stone pelting and protests.

Reports said that incident happened when Mushtaq Ahmed Khanday and his colleague were shopping in the main Baramulla market in civvies when suddenly a group of youth appeared on the scene and manhandled them.

“Youth took Khanday with them. However his associate managed to escape from the spot.” eyewitnesses said.

A police officer who wished anonymity said that youth were demanding release of their associate who was arrested by Jammu and Kashmir police today in the wee hours on the charges of stone pelting in the area.

Police officer said that ‘Hundreds of policemen and paramilitary forces have been deployed in the town and special team has been set up to rescue the policeman’.

Baramulla town is considered one of the hot beds of separatist movement from the inception of armed conflict. A police officer who wished anonymity said that Baramulla is considered a volatile area which erupts any time. “We have been given strict orders by the higher ups to avoid confrontation with public unnecessary as protests in the town swallow with in no time to other areas of Kashmir, “a police officer said.