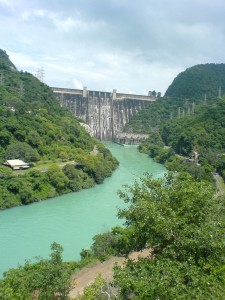 Shimla: The water levels in Bhakra and Pong dams of Himachal Pradesh have not reached the maximum limit this year owing to the deficit monsoon in the state, officials said Monday.

Both the dams serve the irrigation requirements of Punjab, Haryana and Rajasthan.

“The water level in the Bhakra dam’s Gobind Sagar reservoir and the Pong dam reservoir stood at 1,650 feet and 1,378 feet,, respectively, Monday,” said an official of the Bhakra Beas Management Board (BBMB), which manages both the dams built on the Punjab-Himachal border.

The official added that the water levels in Bhakra dam and Pong dam were 1,680 feet and 1,388 feet, respectively, the same day last year.

This means that the water level in Bhakra dam was still 30 feet below the maximum capacity, while it was 12 feet less than the upper limit in Pong dam reservoir.

Authorities said the water level was even lower compared to the previous year, but the situation improved as the southwest monsoon intensified over the state and now the water is at a comfortable level.

The weather office in Shimla said the monsoon this time in the state was 19 percent deficient.

The monsoon is likely to withdraw from the region by the last week of this month, he added.

While the Bhakra Dam is built on the Sutlej river, the Pong Dam is on the Beas river.

The water level in Bhakra dam was recorded at 1,537 feet July 4 while in Pong it stood at 1,289 feet. The water level in both the dams on that day was over 60 feet lower than what it was on the same day last year.