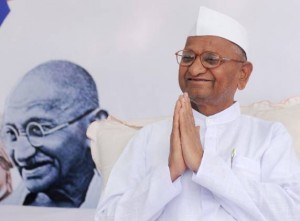 New Delhi: Social activist Anna Hazare Sunday said it was during his five-day fast at Jantar Mantar last week that he realised the need to give a political alternative to the people.

The septuagenarian and his team announced their foray into politics after ending their agitation for a stricter anti-graft bill Friday. Team Anna members Arvind Kejriwal, Gopal Rai and Manish Sisodia had also been fasting for a week.

“The people had constantly been asking for a political alternative in the democracy. People turned up at my village Ralegan Siddhi, and even at Jantar Mantar,” Hazare posted on his blog ‘Anna Hazare says’.

“Then I realised that it is important to provide them (people) an alternative. Their demand is right,” the veteran activist added.

Hazare, 75, said it was after struggling for over a year for the Jan Lokpal Bill that he realised the need for a political alternative.

“Our long struggle and betrayal (by the government) go into this decision. It is not easy to give an alternative, but it is not impossible,” he wrote.

Hazare reiterated that he would not contest the polls, but continue efforts against corruption.

“I am repeating that I will not contest any elections. But I will travel across the country and motivate people to develop a corruption-free India,” Hazare said.