At the on-sight, it was a very nominal gathering that looked no more than 60-70 people and one could see that as more and more people were streaming in, banners and placards were coming up. A shamiana was put up and mattresses were laid down wherein people can sit. The mike was still to be connected and chaos yet ruled the place.

By around 10AM, things began to get clearer. Save Family Foundation (SFF), a Delhi based NGO that supports victimized and distressed men has organized an All India Protest against the Marriage Laws (Amendment) Bill, 2010. SFF is part of the Save Indian Family (SIF) movement that has been the spearhead of the men’s rights movement in India – talking and creating awareness about problems and issues faced by men, especially husbands and supporting them. 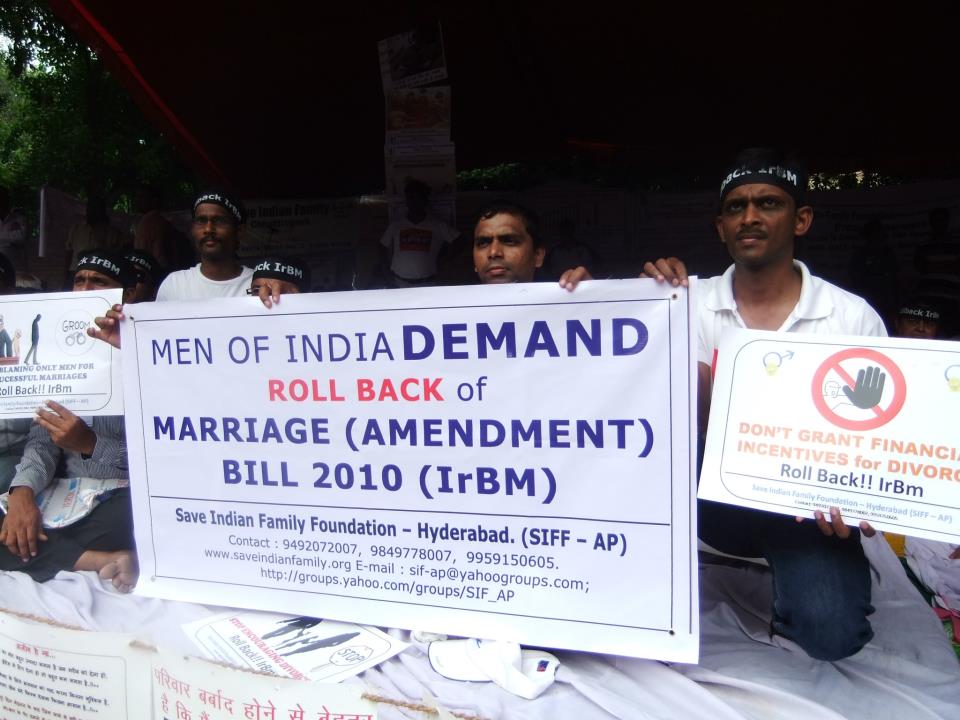 This bill, which we prefer to call as The Gold Digger’s Law proposes to usurp at least 50% of moveable and immovable properties owned by husband in the event of a divorce. As per this bill named The Marriage Laws (Amendment) Bill,

1. It does not matter, as to why the marriage did not work.

2. It does not matter, whether wife already owns property.

3. It includes all properties (movable/immovable) that belong to the husband – bought prior to marriage, during marriage or acquired as part inheritance.

5. Only wife can oppose divorce if she thinks the divorce is going to create “financial hardship” for her. The husband has been deprived of this right.

6. This bill violates guidelines laid down by the Honorable Supreme Court of India.

7. This bill is also silent on custody of children post-divorce.

This bill has been brought forward owing to a recommendation made by the Honorable Supreme Court of India in Neetu Kohli vs. Naveen Kohli, wherein the court observed that litigations related to marriages were getting prolonged for no reason and because there was no ground for granting divorce under “Irretrievable Breakdown of Marriage”, parties kept on fighting to get divorce. Hence, it recommended that a ground for irretrievable breakdown of marriage be added in the divorce laws and the laws be so amended.

The recommendation also mentioned that with the introduction of such a ground, all other pending litigations between the parties like cases of dowry harassment, maintenance, child custody, etc. be also brought to an end and there was NO MENTION about any kind of division of property.

However, when the bill came out of the Govt. coffers, it was the exact opposite of the recommendation.

1. It made no mention about ending other pending litigations, and

2. It included a clause of giving at least 50% share of the husband’s property to wife.

The bill mentioned only about “financial hardship” of wives. What if, a man meets an accident that renders him handicapped for life and he is thrown into financial hardship and his wife files for divorce? 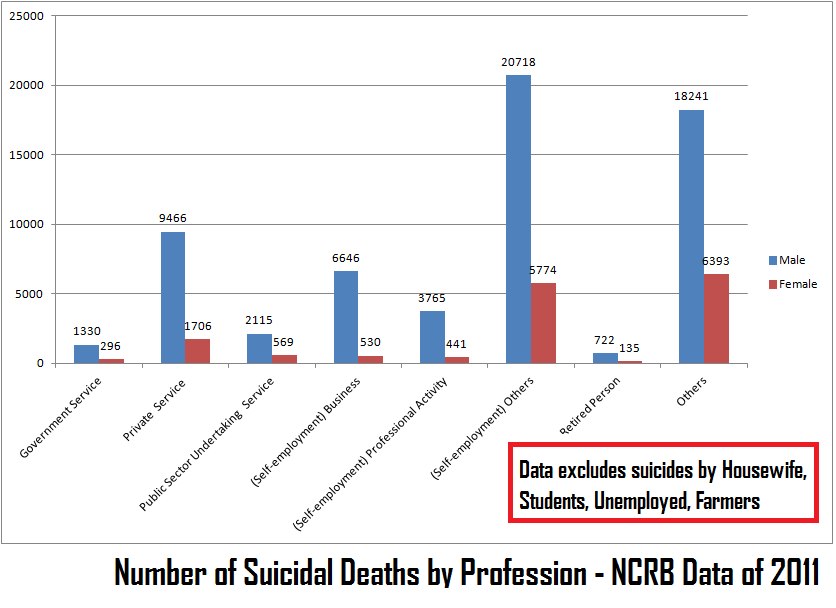 Ignoring interests of men and bowing to pressure from radical feminist groups, the Govt. of India went on violating one after another points in the recommendation made by the Honorable Supreme Court, rendering the bill as anti-husband as possible. Adding fuel to the fire was the male-hatred that reflected in the reporting by the mainstream media that called such an extortionary, unconstitutional, gender-biased and anti-male husband killer bill as PROGRESSIVE.

Various groups fighting for the welfare of men in society had also presented their recommendations and objections to this Bill before the Standing Committee of Parliament in November 2010. However, the committee conveniently chose to ignore men’s problems, even to the extent that remarks were coming like – “kya ho gaya jo aadha ghar de diya to, biwi ko hi diya hai na, naya bana lena dene ke baad, kisne roka hai?” (“So what if you have to part with 50% of your property, you are giving it to your wife only, make a new one after divorce, who has stopped you?”)

Such statements depict a very dangerous social mindset poised against men which considers men as disposable entities and beholds no respect for a man’s emotions. Only a man will understand the pain he undergoes when he is forced to pay to his abusive and demanding wife. And when laws are created with such a mindset at the background they will only wreak social havoc.

Sensing deep male hatred in the society, men’s rights activists decided “Enough is Enough” and demanded a complete rollback of this husband killer Gold Digger’s Law. As a result, a massive protest was organized, in which 400 leaders of the men’s rights movement, representing about 40 NGOs and 50000 members all over India, participated. This protest took place on the 18th of August 2012 from 10 AM to 4 PM and was held at the Jantar Mantar, New Delhi.

The protest went on day long wherein various leaders presented their thoughts on how this bill is going to adversely affect all marriages and how men are going to be harmed by this bill. Pamphlets were distributed to common people to create awareness about the bill. Street plays were organized by activists to showcase the pain of a husband and his family. Poems were recited to highlight the emotional trauma that a man undergoes in an abusive marriage.

Memorandums from various NGOs were submitted to the Prime Minister’s Office which contained a description about the objections and demands pertaining to this bill.

Prior to the event, men’s rights movement leaders met Members of Parliament (MPs) in Delhi and expressed concerns over the bill becoming a law. Many of the MPs resonated with the views of men’s rights movement and were ready to support us. Meeting the MPs would continue in future as well. 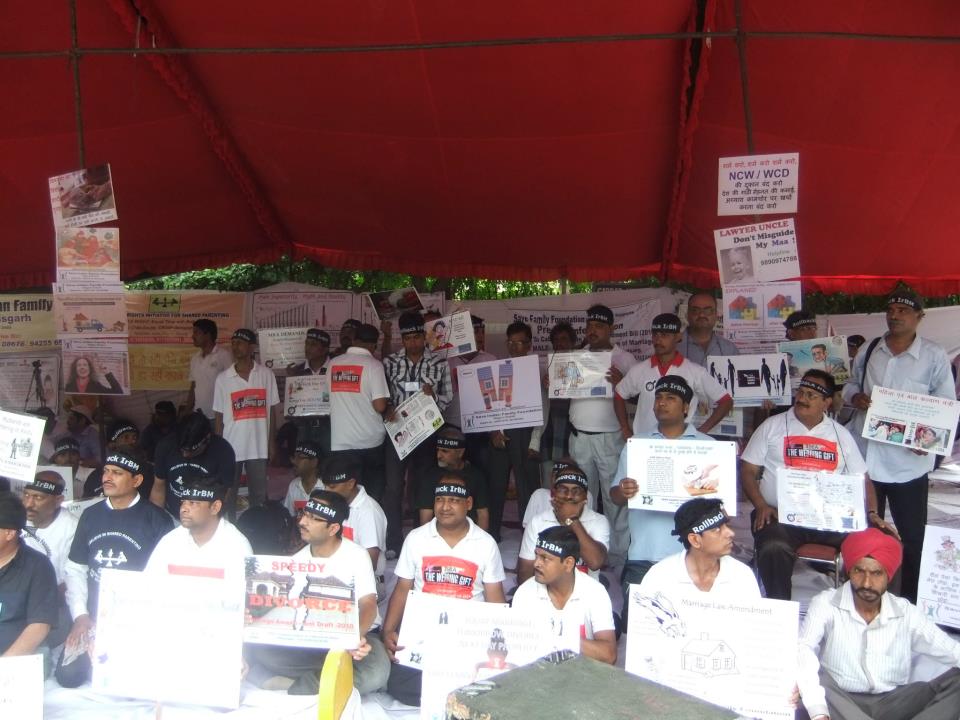 The demands made in the protest were,

1. “Rollback Marriage Laws (Amendment) Bill” as Indian men do not want another extortionary law in the name of speedy divorce. As of now this bill has been approved by Cabinet and is pending debate in the houses. However, men’s rights organizations demand that the cabinet approval be undone and no such law should be passed.

2. A new bill must be re-written from scratch that will be as per the guidelines laid down by the Honorable Supreme Court of India.

3. The Govt. of India, especially, the Ministry of Law and Justice must stop fooling the people of India and it must come out clean on the law-making process.

I would be ending this article in the words of Mr. Swarup Sarkar, Coordinator, Save Family Foundation, Delhi –