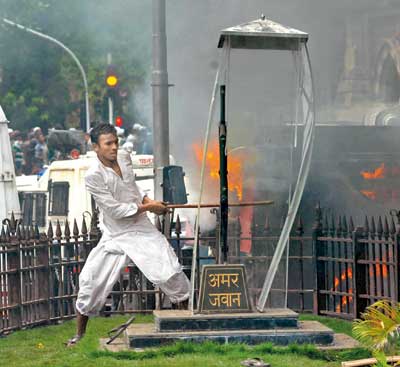 The sources identified the suspect as Abdul Quadir and said he was taken into custody from Jogeshwari in north Mumbai.

He is said to resemble the person caught on camera destroying the memorial.

Two people were killed and over 50 injured Aug 11 when a rally taken out to protest attacks on Muslims in Assam turned violent. Mumbai violence resulted in exodus of NE people from different parts of the country.

The incidence resulted in political turmoil and the then Mumbai Police Commissioner, Patnaik is also believed to be transferred because of his inability to control the vandalism.

A total of 52 people have been arrested for the violence. Three of them were let off Monday due to lack of evidence against them.