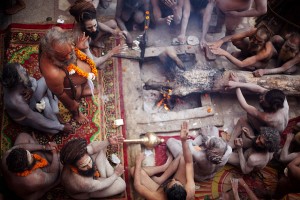 Dehra Dun : It well amounts to throwing the baby out with the bath water, but the Juna akhada has decided that it will not allow the entry of foreigners within its premises, specially foreign women, after one of its senior sages, married a former and gave up his ‘sanyas’ a few days back.

It may be recalled that Sadhu Digambar Narain Giri, stationed at the Juna akhada in Haridwar, married a foreigner woman a couple of days back, who had come to the ashram and was living there for some time. So peeved was the Juna akhada which boasts of Naga sadhus, that Digambar Narain Giri and two Naga sadhus close to him were debarred from the akhada.

In fact the Juna akhada hierarchy also wrote a letter to also the akhadas that Giri not be allowed entry or helped in any way for eking a livelihood. When asked whether Giri had left Haridwar, the Juna khada authorities claimed that they were not aware of his whereabout or the other two Naga sadhus who had also been debarred.

The Juna akhada said that the ban on the entry of foreigners would remain in affect even during the Kumbh Mela to be held later onAllahabad. “WE will also get in touch with the other akhadas, so that they can also enforce the ban on foreigners entering their akhadas, to bring about a uniformity”, the akhada authorities said.

Incidentally, it is because of the large strength of Naga sadhus that the Juna akhada is considered the biggest akhada amongst the sect. But the marriage by ine of its senior Naga sadhus to a foreigner had come as setback to the akhada hierarchy, as they felt that it had reduced the stature of the akhada.

Asked why were foreigners allowed entry to the akhadas, national secretary of the akhada Hari Giri Maharaj said that they were permitted so that they could learn something and get involved with the sanatan culture and study the various aspects of this culture and tradition.

“But it is was now being felt that the entry of foreigners into the akhadas was bringing about a change in the life style of the Naga sadhus of the ashram. It was because of this that Sadhu Digambar Narain Giri got carried away and retruned to the worldly ways that he had renounced years back, when he was initiated as Naga sadhu”, he added.